written and directed by Eric Bednarski

We think of Nazi ghettos as impregnable and inevitable, mile markers along the Third Reich’s march to the Final Solution. What we learn from an important new Holocaust documentary called Warsaw: A City Divided is that the Warsaw Ghetto walls were products of urban planning.

The ghetto was officially justified by the Nazis as a “public health” measure, serving, they said, to protect the population from “disease-carrying Jews.” The exact placement of the walls was subject to haggling with city administrators who worried about things like traffic problems. It’s odd to think about traffic patterns in relation to the murder of Jews, but it reminds us that genocide was built on thousands of acts of seemingly mundane bureaucracy.

A remarkable achievement, Warsaw: A City Divided premiered this May in Warsaw. Showing through September 15 at a Jewish film festival in Warsaw, the film will also be shown in film festivals this fall in Ohio, Los Angeles, and Romania. It will also be available for sale and on some streaming services, including Vimeo.

The film feels especially meaningful as we reflect on the 80th anniversary of the German invasion of Poland that started September 1, 1939. The city of Warsaw fell on September 28. The initial battle for the city killed 30,000 people and destroyed 10 percent of the city. By the end of the war, 84 percent of the city’s architecture had been destroyed.

Warsaw’s postwar identity has been tied, in part, to its status as a city rebuilt. Much of the city was filled in with buildings in the new Socialist Realist style. The historic 18th-century Old Town, however, was reconstructed as a replica of what had come before, based on old documents and plans. Today, Old Town has its own tourist site on the internet and hundreds of five-star reviews on TripAdvisor. But the Warsaw Ghetto—arguably one of Warsaw’s most famous sites—was, of course, not reconstructed. It had been disassembled and plundered, its remaining buildings then dynamited on the order of Heinrich Himmler. The Nazis had hoped to build a garden atop the former ghetto site. Instead of a Nazi garden, after the war, a new Warsaw bloomed. What had been the ghetto area now contains apartment blocks and other new construction, sitting four to five feet above the original street level, built with, and atop, the rubble of the bombed-out ghetto buildings.

Featuring 10 minutes of newly found amateur footage shot inside the ghetto, A City Divided does something quite extraordinary: It takes us to a place that no longer exists.

The Warsaw Ghetto was among the first ghettos established by the Nazis and the largest. It held over 400,000 Jews, almost 100,000 of whom died inside it. Today, only a few scattered pieces of the ghetto walls that imprisoned them still stand, including fragments between properties as well as the sections of the wall that are were part of buildings.

Unlike Auschwitz or Dachau, the Warsaw Ghetto cannot be visited in any meaningful way. And yet, the ghetto looms large in Holocaust memory. The uprising there in 1943 is still the most famous act of Jewish resistance. In addition to Yom HaShoah, many Jews, especially those with family connections to the Warsaw Ghetto, observe April 19, the date of the beginning of the uprising, as a sacred day.

In addition to the newly discovered footage, writer and director Eric Bednarski uses a mix of archival documents, architectural plans, and, most movingly, eyewitness testimony. Irena Agata Boldok is a Jewish Warsaw resident who spent two years within the ghetto before escaping to the Aryan side.  Bednarski films her in front of one of the most famous wall fragments, at Sienna Street, where a plaque commemorates the horrific events that took place inside the ghetto walls. “This was a street I was scared of, and I still am to this day. I’ve never walked this street without feeling afraid.” Boldok describes how after the war she returned, over and over, to this fragment, hoping to find the hole through which she and her mother had escaped. It’s a quietly devastating moment.

A City Divided is also the story of architects and architecture. We meet Niels Gutschow, whose father was an architect who joined the Nazi Party, “like most architects.” Gutschow is a German architectural historian who describes himself as a “private detective.” He went looking for the architects who built, and destroyed, the ghetto, architects like Hubert Gross. Gross dreamed of obliterating Warsaw and building a new city atop its ruins. It’s hard not to feel a surge of rage as Gutschow calmly describes Gross returning to his hometown at the end of the war, burying his Nazi uniform in the woods, and declaring, “I don’t feel any guilt.”

Though the movie makes effective use of Nazi archival materials, they never take over the film. Indeed, A City Divided is one of a handful of new documentaries that focus less on describing the crimes of the Nazis and more on the experience of the victims. These films are reshaping not just what we know about the Holocaust, but how we know it. A City Divided also joins A Film Unfinished (2010) and Who Will Write Our History (2018) as a sort of Warsaw Ghetto trilogy. Although they were produced and directed by different teams, all three have archival footage and written documents at their center. Viewers can examine the same “story” through three different lenses—German, Jewish, and Polish.

A Film Unfinished unraveled the mystery of a 1942 Nazi propaganda film that was shot in and around the ghetto and was later mistaken for a factual documentary. It annotates Nazi-created footage with the voices of past and present-day Jewish witnesses. Who Will Write Our History used modern-day actors to recreate ghetto life, dramatizing writings by the members of the Oyneg Shabes collective.

Warsaw: A City Divided uses footage of the ghetto shot in 1941 by an amateur Polish filmmaker named Alfons Ziolkowski. Until now, historians believed that all existing film records of the ghetto had been created by Nazis, much of it for propaganda. In A City Divided, we get a silent glimpse of ghetto life shot from a Polish point of view.

For reasons that are still unclear, Ziolkowski had official permission to enter the ghetto. He visited several times between March and November 1941, during which he filmed what he saw, at times seemingly in the open and at other times covertly. Sometimes the footage is almost boring in its portrayal of ordinary people walking along almost normal streets, and at other times, the violence of ghetto life leaps off the screen.

Though 10 feet tall and topped with barbed wire, the walls of the ghetto were, in fact, porous. Small openings for water drainage dotted the bottom of the wall. These holes were used by the ghetto’s children to pass things in and out of the ghetto. Ziolkowski actually captured one of those moments on film. It’s one thing to learn that 80 percent of the food in the ghetto was smuggled in; it’s another to see footage of a Jewish child attempting to smuggle something through the wall and then being beaten bloody by a soldier. Smuggling was the lifeblood of the ghetto, even though it was punishable by death.

As I watched the silent, at times disorienting, images of A City Divided, my understanding of  Warsaw Ghetto was rebuilt. Just as I was wondering what an unremarkable street scene could tell me about genocide, the camera’s eye slides over a nameless man lying on the ground, perhaps dying, or already dead.

Some Holocaust narratives focus on the perspective of Jews, while others turn their gaze to the crimes perpetrated upon nameless victims. In this sense, the 8mm footage of A City Divided falls between Who Will Write Our History and A Film Unfinished. Its point of view is ambiguous, and little can be guessed about the motivations of the man behind the camera. Ziolkowski’s filming was certainly not hypocritical or sadistic like that of the Nazi filmmakers who forced Jews to play happy “residents.” As I watched his footage of a Jewish man lying on the ghetto ground, I was shocked into imagining myself there, shocked into a tiny understanding of what everyday life was like in an otherwise inaccessible place.

After the Germans finally crushed the Warsaw Ghetto Uprising, the ghetto was methodically razed, its building-by-building destruction meticulously documented by Nazi photographers and architects. Before the war, Warsaw had been the second-largest Jewish community in the world. At the end of the war, only a handful of its Jews were left alive. The remains of the dead were, quite literally, built into the foundations of the new city.

There’s a remarkable moment at the end of A City Divided. The Chief Rabbi recalls how one day a resident of the Muranow neighborhood built on top of part of the ghetto came to him for help. “There are spirits in my apartment, can you do something?” Finding restless ghosts at the site of the former ghetto is almost too on the nose. And yet, we often see ghosts because we need to see ghosts.

Holocaust commemoration in the 21st century is haunted by the disappearance of elderly survivors, as well as the physical deterioration of historic killing sites. Each gives us access to irrefutable evidence of crimes that the world would love nothing more than to forget.

“[T]he destruction of humans is often symbolized by ruins,” writes Jerzy Elzanowski, a Polish historian of architecture and conservation.  Warsaw’s lack of ghetto “ruins” confounds a satisfying encounter with the past, while the ghosts of the Muranow apartment block speak to the unquiet nature of memory. 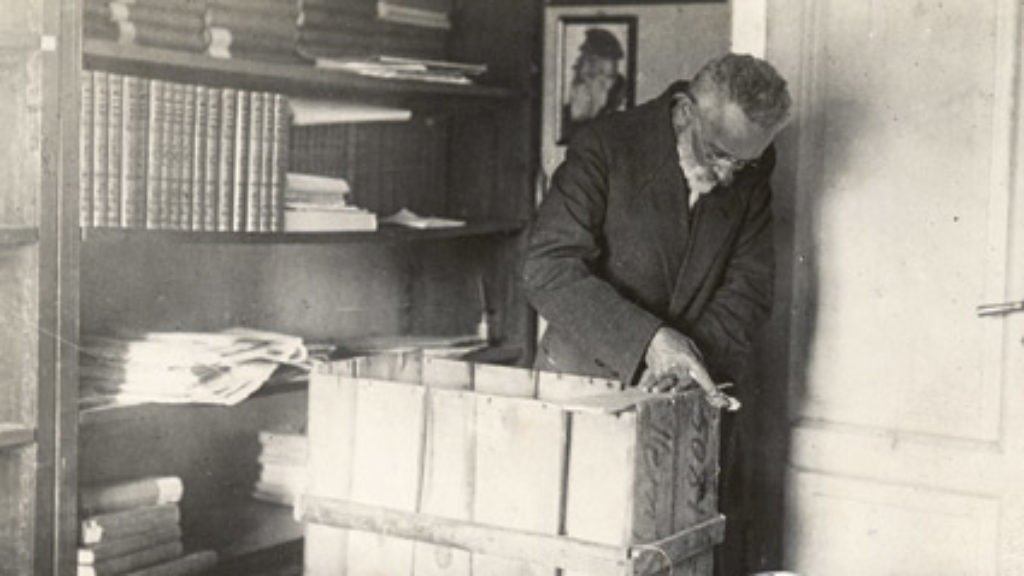