The Patriots: A Novel

The Patriots, Sana Krasikov’s debut novel, opens with a startling inversion of one of the most closely held of American myths: the great ingathering of the world’s immigrants. It’s 1934 and New York–born Florence Fein, an idealistic Brooklyn College graduate, is leaving America for the young USSR. Standing on the deck of a ship in New York harbor, she looks down at crowds of Danes, Germans, and Poles waiting to board, all of them going back to their homelands in search of work. For Florence, it’s like “watching an old Ellis Island film reel flipped by the Depression into reverse: masses of immigrants . . . herded backward through that great human warehouse as Lady Liberty waved them goodbye.”

Florence is determined to fit in, to be worthy of the extravagant “peace to the people, land to the peasants” promises of her adopted homeland. At first, she succeeds. Affecting “proletarian respectability,” Florence is reassured by the rudeness and ill-humor of the Moscow streets that she is “no longer regarded as a delicate, confused alien but a bona-fide Soviet.” For a time, it seems that Florence can be a patriot too. She marries Leon Brink, another American Jew pursuing social justice, finds herself a job in the vast Soviet bureaucracy, and moves into a 1930s kommunalka (communal apartment). But Florence’s utopianism doesn’t last long. Not only do the realities of everyday life—the shabbiness, the endless lines—start to wear on her, she comes to realize that beneath the “behemoth abstraction of the great Russian narod [people]” lies “its all-embracing ignorance and malice, the grand scale of its pettiness, its envy.”

As disillusionment takes hold, Florence contemplates returning to the United States. But, abandoned by the U.S. government, her U.S. passport confiscated, she is manipulated into becoming an informant for the NKVD (a forerunner of the KGB). “We hope,” says the sinister Comrade Subotin, in a tour de force of doublethink, “that as a loyal citizen this is something you could do sincerely.” As the Great Terror gives way to the Great Patriotic War, and, ultimately, to the final bloodletting of the Stalin era, Florence betrays friends and colleagues. Her husband disappears into the whirlwind, her son grows up in a state orphanage, and she herself ends up in the Gulag. For Florence, the cost of patriotism, to say nothing of belonging, is devastating.

The irony implicit in The Patriots is that while many Jews embraced the Russian revolutionary cause from the very beginning—four of the seven members of the first Bolshevik Politburo were Jews—the revolution did not embrace them for long. For Russian Jews, the revolution represented liberation from centuries of tsarist oppression. For diaspora Jews such as Florence and her husband it held out the promise of a just society in which all people—workers and peasants, Jews and Gentiles—would at last be equal. What they didn’t reckon with was the deep vein of anti-Semitism undergirding Russian culture and Russian history. It wasn’t excised in the great changes that birthed the USSR, merely disguised, and not particularly well.

It is Sana Krasikov’s understanding of this great truth of Russian history that gives rise to some of the most affecting parts of her novel. After the Nazis invade the Soviet Union, Florence is evacuated to Kuibyshev, on the Volga, where “after years of evading peacetime terror,” she emerges “into the relative safety of war.” She and Leon are put to work translating Soviet war reportage into English so that it can be reprinted in American newspapers.

Florence’s work brings her into contact with the Jewish Anti-Fascist Committee, a relationship that forces both Florence and the reader to reflect deeply upon the “hidden history” of the USSR. Undoubtedly the Soviet Union’s greatest wartime propaganda coup, the committee brought together the most celebrated names in 20th-century Yiddish art and literature—Peretz Markish, Itzik Feffer, David Bergelson—all under the tutelage of the great Yiddish actor Solomon Mikhoels. In 1943, the Soviet Union sent the committee on a lengthy tour of Allied countries, where it raised millions of dollars in financial and material aid for the Soviet war effort and generated an outpouring of sympathy for the huge (and genuine) sacrifices being made by the USSR, the Red Army, and the Russian people. But even as they basked in the adulation of American Jews, Mikhoels and Feffer understood how “this public ceremony of adoration would be repaid with a private ceremony of vengeance once they returned home.”

Repayment was not delayed. Almost as soon as the war was over, Stalin began his campaign against “rootless cosmopolitans” (yet another in the endless list of code words for “Jew”) that culminated in the so-called Doctors’ Plot, a second Shoah averted only by Stalin’s death in 1953. One of the first to go was Mikhoels, beaten to death by secret policemen and then run over by a truck to make it look like an accident. Krasikov describes Mikhoels lying in his coffin, “his mutilated features made up with greasepaint as if for one last role.” Florence, attending this “ritual of sanctioned absurdity” called a state funeral, looks up at the roof of the Moscow Jewish Theater. A lone fiddler, coatless in the January wind, is playing a dirge in memory of Mikhoel’s role as Tevye the Dairyman. It is an astonishing moment: “The fiddler, whoever he was, continued to play his strange requiem into the evening, long after the last of the mourners was gone.” With this one haunting image, familiar yet unfamiliar, Krasikov manages to evoke, for Florence and for us, not only an entire culture but also to lament the brutal sacrifice of that culture on the altar of patriotism and belonging.

Florence’s life illustrates the capricious cycles of Russian history. Released from the camps after Stalin’s death and reunited with her son, Julian, the “rehabilitated” Florence eventually finds a modest job in a foreign-language bookstore. But the cautious hopefulness of the Khrushchev thaw gives way to the neo-Stalinism of the Brezhnev era.  Julian, a brilliant engineering student, runs afoul of the strict Soviet quota system and goes from being a “promising doctoral candidate to being another Jew denied a degree.” Julian finds opportunity denied him in the USSR in the Carter administration’s pragmatic offer to exchange American grain for Soviet Jews and flees the slowly dying USSR with his family. Florence finds herself right back where she started, walking the streets of Brooklyn as her mind alternately defends her original flight to the illusory promise of Soviet freedom and floods with guilt for the compromises she made. At the end of her life she finds a semblance of satisfaction, perhaps even peace, as a sort of den mother to the legions of Soviet émigrés who are starting to fill the streets and walk-up apartments of New York’s outer boroughs.

Julian, meanwhile, returns to Russia in 2008.  His son and Florence’s grandson, Lenny Brink, also goes back to the country he left as a child, hoping to make his fortune in the Wild West Russian economy of the first decade of the 21st century. When Lenny falls afoul of the Russian legal system, Julian’s efforts to help his son pull him into a moral landscape that is both twisted and familiar. Meeting with his “fixer,” a wealthy businessman, Julian watches the man pull back his cuff to reveal a gold Rolex, but what he really wants Julian to see is his gangster’s calling card: “a faded purple tattoo of a card with an upside-down spade. ‘This I got in Khabarovsk [a notorious outpost of the Gulag]. Now, that wasn’t comfortable. But wherever we are, we must learn to be comfortable.’” Julian may be compelled to find his comfort amidst the same kinds of compromises that his mother did.

Krasikov is a good storyteller, and she has deftly created compelling characters. The Patriots is both readable and thought-provoking, but it is longer than it needs to be, and its shifting timelines and narrators can be confusing. Some anachronisms and redundancies distract. I am sure, for instance, that nobody at the famous 1959 American National Exhibition in Sokolniki Park in Moscow was sporting “gelled” hair.  Brylcreemed, perhaps!

But these are minor complaints. Krasikov, who was born in Ukraine and raised in the Republic of Georgia, is probably too young to personally remember the privations and indignities of Soviet life, but she recreates them skillfully for her readers while exposing the moral darkness that lay at the heart of the Soviet enterprise.

“Patriotism,” Samuel Johnson famously said, “is the last refuge of a scoundrel.” The Patriots could easily have been a polemic. Instead, Krasikov chooses to evoke the unutterable sadness of the last century of Russian history, so intimately bound up with Jewish history. Krasikov’s Russia, a country she clearly knows well and loves deeply, has survived revolution, war, Stalin, and the leaden stagnation of the Brezhnev years, only to find itself run by an interchangeable cast of gangsters, grifters, and, once again, secret policemen. Patriots all, no doubt, but scoundrels through and through.

Scholars and lay readers remain fascinated by the biblical stories of David and the history behind them, as a new batch of books shows. 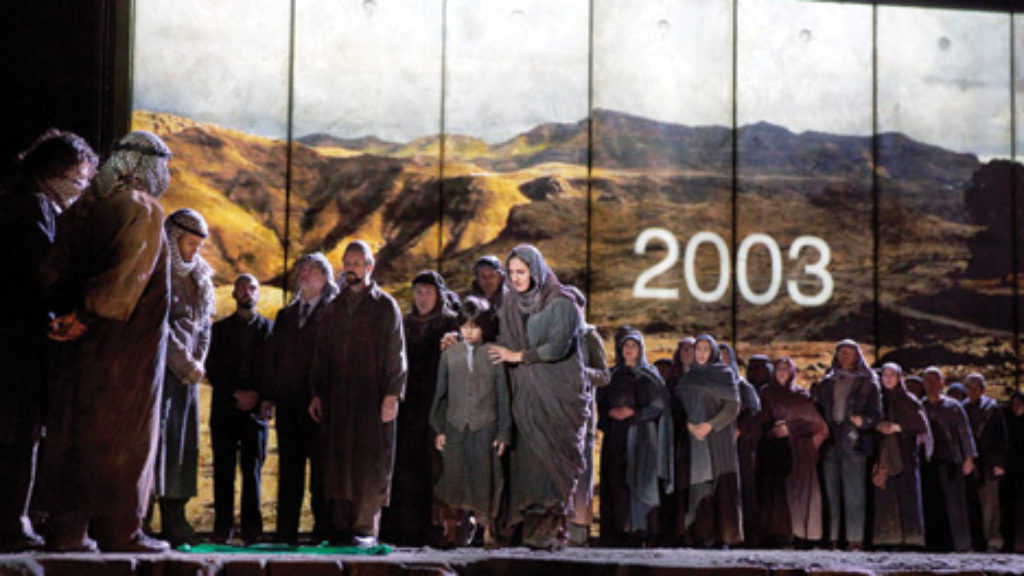 Going Under with Klinghoffer

When it came to New York’s Metropolitan Opera this past fall The Death of Klinghoffer faced angry—and, it must be admitted, some pretty shrill—demonstrators.