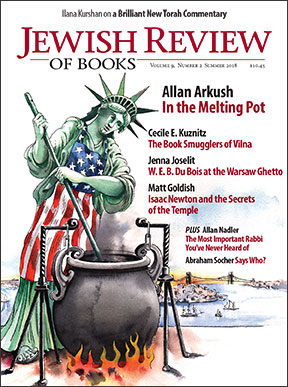 Poland and the Devil’s Point of View, Abraham’s Genome, Who's the Sabbatean?, and More

It takes a bit of a genius to successfully study a genius, and in this case one must first master the millions of words Isaac Newton wrote about natural theology, doctrine, prophecy, and church history.

Stanley Kubrick was a New York Jew, fascinated with photography, jazz, and chess. He took evening classes at City College and studied at Columbia with Lionel Trilling.

Rabbi Nachum Rabinovitch has been working on his commentary to the Mishneh Torah for the last 41 years. It may be the greatest rabbinic work of the century.

On Literary Brilliance and Moral Rot

Why did the prestigious publishing house Gallimard want to publish three vilely anti-Semitic pamphlets by Louis-Ferdinand Céline? And is he still worth reading?

Peter Berger listened to me patiently, and then he said, “You can come to see me, but”—and here he spoke with heavy emphasis—“it sounds like you have read my books . . . and I haven’t thought of anything new.”