Robert De Niro and his fellow judges at Cannes are not generally known for their interest in Jewish studies, but an Israeli film set in the Hebrew University’s Talmud department won the award for “Best Screenplay” at the prestigious French film festival this spring. Since its opening in June, Hearat Shulayim (Footnote) by director and screenwriter Joseph Cedar has, not surprisingly, been the subject of incessant discussion among Israeli academics, but it has more on its mind than academic gossip. It is at once a family melodrama, a playful comedy, and a serious philosophical inquiry, as well as a series of winks and nods to those familiar with the academic subculture it portrays. 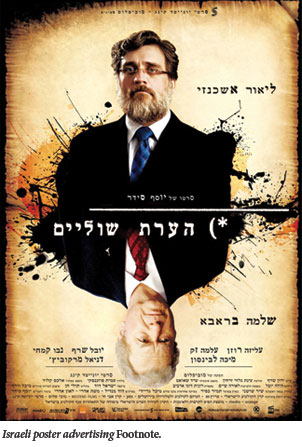 As the film begins, words in a font characteristic of academic Hebrew footnotes are typed across the screen informing viewers that they are about to witness “the worst day of Professor Scholnik’s life.” The scene shifts to a ceremony held at The Israel Museum to mark the induction of Professor Uriel Scholnik (superbly acted by the Israeli film star, Lior Ashkenazi) into the Israel Academy of Sciences. Uriel is an accomplished and gregarious professor of Talmud at the Hebrew University, whose carefully unkempt mane, designer glasses, solid maroon knit yarmulke, and salt-and-pepper beard reflect the well-cultivated image of a Jerusalemite public intellectual. Indeed, a later scene in which Uriel removes the yarmulke upon entering his home office may cause viewers to wonder whether Uriel is, to adapt a famous phrase, “a Jew in the street but a man in the home.” He stands at the podium and accepts the honor with the kind of self-deprecating humor and sardonic wit born of confidence and a strong sense of self-worth.

Sitting in the audience is Scholnik’s father, Professor Eliezer Scholnik (perfectly played by Shlomo Bar-Aba), an excruciatingly pedantic and methodical scholar on the faculty of the same university Talmud department as his son, though he is far less prolific, and for that matter, less popular. The peak of his career was his appearance, decades earlier, in a footnote in J. N. Feinstein’s magnum opus, Introduction to the Text of Tannaitic Literature (a riff on the father of modern, critical talmudic research, J.N. Epstein’s two books, Introduction to the Text of the Mishnah and Introduction to Tannaitic Literature). Close-ups of Bar-Aba’s talented, old-school face-acting (he is first and foremost a stage comic) call attention to the senior Scholnik’s palpable discomfort as he sits slumped in a chair, listening enviously as his son pays homage to the father who set him on his course. Although the identity of the “Professor Scholnik” who is experiencing the worst day of his life is initially ambiguous, it is clear by the end of the scene.

In addition to their strained filial relationship (one that occasionally feels more appropriate for siblings than for father and son), Uriel and Eliezer represent two different conceptions of the role of the academic. Is the professor’s primary place in the classroom or in the bowels of the library (or laboratory)? In the language of the film, is he a teacher or a philologist? Eliezer hearkens back to the old, German-style ivory tower scholar, while the extroverted Uriel represents a younger generation of socially engaged intellectuals. The tensions are heightened by the fact that the differences between father and son, teacher and philologist, intellectual and scholar, go virtually unnoticed by the rest of the world outside their rarefied discipline. This enables the tragicomic case of mistaken identity that drives the film’s plot. And so, after setting up these oppositions, Cedar undermines them by forcing Uriel and Eliezer to trade places.

The reversal begins, we are told in the same scholastic font as the film’s first announcement, on “the best day of Professor Scholnik’s life.” As Eliezer walks from his home to the library along the same route that he takes every day, rain or shine, he is informed that after decades of neglect he will be awarded the Israel Prize, the country’s highest honor, whose national significance has no real North American parallel. Though he promptly sets off for his regular haunts in the library, everything has changed for Eliezer. Mysteriously, he is no longer stopped by security guards, who throughout the film function as gatekeepers, determining who has achieved the status of insider. Try as he might, Eliezer is also too excited to operate the microfilm machines on which he normally takes great pains to compare medieval talmudic manuscripts. Instead, he shares the news over lunch with a silver-haired woman in a semi-secluded university garden. Meanwhile, Uriel emerges from a campus health club shower wearing a towel, only to realize that he has been robbed of his clothes. Improvising, he borrows some fencing gear, complete with rapier, from the studio next door and ventures forth, only to stumble upon his father sharing a romantic moment with his mysterious lady friend.

This scene marks the most obvious example of Cedar’s return, in Footnote, to his fascination with the issue of Jewish-Israeli masculinity. Until this point in the film, Uriel has been presented as a symbol of manhood and virility. Even the midwife flirts with him as his wife labors to deliver their baby. Eliezer, on the other hand, carries his smallish frame with a slack posture, and usually spends his nights sleeping alone on a couch in his study, apart from his somewhat masculine wife (played by Aliza Rosen), with whom he rarely talks. But from the moment Eliezer learns of his prize, no swordsman’s costume can hide Uriel’s emasculation.

Cedar cleverly hides an explicit reference to these gender constructions in plain sight. Early in the film, Eliezer overhears a cocktail party conversation at the Israel Academy of Sciences ceremony in which Uriel and others discuss controversial Berkeley professor Daniel Boyarin’s Unheroic Conduct: The Rise of Heterosexuality and the Invention of the Jewish Man, a study of Jewish masculinity whose central thesis is that Zionism has unfortunately replaced the idealized effeminate, scholastic, Jewish male with the new Hebrew warrior. This is just one example of a strategy that Cedar deploys throughout the film, which we might call a cinematic footnote. Footnote‘s footnotes perform many of the roles that written footnotes do: citation, background exposition, and, of course, name-dropping. This technique makes for some of the film’s quirkiest and most amusing moments. Characters are fleshed out in expository asides introduced by written text, voice-overs, and rapidly scrolling microfilm.

Footnotes, however, serve as more than a cinematic device here. The Hebrew term for footnotes, “hearot shulayim,” literally means “marginal notes” or “marginalia,” and it captures the sense of marginality that is at the core of Cedar’s critique of the academy. The film is set in the Hebrew University Talmud department, whose faculty characteristically publishes articles buttressed by exceptionally long footnotes, and even footnotes upon footnotes. Public disinterest in such pedantry is voiced by the TV host Jacky Levy (also perfectly casted, since he plays himself) interviewing Eliezer in the wake of his newfound celebrity. As the Israel Prize winner attempts to correct slight inaccuracies in the teleprompter’s summary of his work, Levy responds with a dismissive “blah, blah, blah.”

Cedar studied philosophy at the Hebrew University, and Footnote contains many thinly veiled and playful alterations of real people and events famous (or infamous) at the university and within the actual Talmud department. The barbs hurled by professors at their hapless students are genuinely funny, but they will also have a familiar ring to those who have heard (or even been victims of) these recycled witticisms. Thus, Uriel’s reprimand of a graduate student for not having addressed the works of Baer, Ben-Sasson, and Bonfils, “to mention only those whose names start with B,” calls for a footnote to a famously cutting review in the field. Passing reference is also made to the real and tragic case of a young graduate student to whom the department refused to grant a PhD even though she was on her deathbed. The film also pays tribute to Menahem Stern, a Hebrew University historian and Israel Prize winner who was tragically murdered during the first Intifada while walking to the university, and whose memorial plaque Eliezer passes on his daily route.

Cedar’s intimate familiarity with his subject’s unique sub-culture turns the university itself into a sort of character. In some Hollywood films, universities are virtually interchangeable, but in the case of Footnote, to replace the libraries and lecture halls of Hebrew University with those of another would be to alter the film beyond recognition. Like Bialik, Grade, Sabato, and perhaps Potok (to mention only those whose name is Chaim), Cedar succeeds in producing a compelling portrait of the talmudic academy, as only an insider can.

The most dramatic (and funniest) scene in the film takes place in a cramped office in the Ministry of Education. There, and later in a book-lined study, Uriel learns something that forces him to question what really lies at the heart of the scholar’s quest: truth or recognition? To one who is genuinely searching for truth, should accolades matter? And if not, what explains the intense competition over such prizes among researchers ostensibly engaged in precisely such pursuits? Is the value of recognition rooted completely in the fellowship of the recognized, and does such fellowship itself depend on the exclusion of the ostensibly inferior? In another brilliant scene, Cedar sets up a rehearsal ceremony where prize recipients practice shaking the Prime Minister of Israel’s hand, but grasp nothing but air. (One wonders if he thought about it while receiving his own award in Cannes.)

To its credit, Footnote leaves its viewers with a lingering uneasiness about its core dilemmas, without making an attempt at resolution. Though its characters belong to the academy, their unresolved anxieties about their own worth and marginality are profoundly and broadly human.

When Woodrow Wilson became the first president to nominate a Jew for a seat on the Supreme Court, much of the opposition to his appointment revolved around his Jewishness.