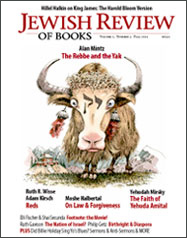 Drowning in the Red Sea

Gennady Estraikh said, "It is hardly an overstatement to define Yiddish literature of the 1920s as the most pro-Soviet literature in the world." When Arab riots killed 400 Jews in Palestine in late August 1929, the Yiddish communist press found itself torn between sympathy for the fallen and loyalty to the Revolution.

What do you do when your ancestor appears to you in a dream saying that he is trapped inside the body of a Tibetan yak? If you're the Ustiler Rebbe in Haim Be'er's new novel, you go to Tibet to find him, of course.

Since the founding of the United States, the American "synagoguge" has survived as a flexible institution—some would argue, too flexible.

A newly published collection of letters shows a new, softer side of Rosa Luxemburg.

The Audacity of Faith

The career and life of Yehuda Amital—unconventional, unpredictable, and free of clichés.

For Israeli artist Yoram Kaniuk, the bohemian world of Billie Holiday, Marlon Brando, and James Agee had a lot to offer, but not enough.

Israeli director Joseph Cedar's new film Footnote was anything but that at the Cannes Film Festival, despite its setting in the Hebrew University Talmud department.