In the summer of 1966, I visited Prague to attend an international Hegel conference. I had been to the city before, and was looking forward to being reenchanted by its historical ambience and mystical atmosphere.

My visit coincided with the yahrzeit for my father, and I planned to go to services at the famous Altneuschul, the beautiful old synagogue in which Rabbi Yehudah Loew, known as the Maharal of Prague, was supposed to have created a golem in the sixteenth century to protect the local Jews. I brought a memorial candle with me as well as a siddur, which I intended to leave at the synagogue, knowing how hard Hebrew prayer books were to come by in Communist countries.

There were no direct flights from Israel to Prague in those years, so I had to fly via Athens where I changed to a Czechoslovak State Airlines flight coming from Cairo. I found myself sitting next to an East German engineer working on the Aswan Dam project, who had never met an Israeli before, so our conversations were interesting.

I arrived in Prague in the early morning hours of Friday, caught a few hours’ sleep and registered for the Hegel conference at the Law Faculty of Charles University. As I did not plan to go back to the hotel before Friday night services at the synagogue, I took the memorial candle and the siddur with me. Upon registering for the conference, I was told that there was a message for me on the billboard, where I found a note asking me and two other conference participants to call Pan American Airways. One of the others was the Frankfurt School philosopher Herbert Marcuse, who would soon become one of the most influential social theorists of the 1960s. I was not scheduled to fly out of Prague on Pan Am—then the only US airline flying to Prague—but decided to call anyway, thinking that there might have been a change in flight schedules.

Still jet-lagged and groggy, I found a public phone in the conference reception area and dialed the number. A female voice asked me to wait a moment, and after some clicks and squeaks—Communist countries’ telephones being what they were—another voice, this time a male one, came on the line. “Welcome to Prague, Dr. Avineri,” it said in excellent Czech-accented English. “Thank you for calling back. Could you please come to the Friday night services at the Altneuschul?”

My reaction was a mixture of surprise, disbelief, and fear. I was going to the Altneuschul anyway, but how could anyone in Prague know this? Was someone spying on me? And in any case, what business did Pan Am have to ask me to go to a synagogue in a communist country? And, now that I was thinking along these lines, was I really speaking to Pan Am—or could this be the Státní bezpeÄcnost (StB), the Czech equivalent of the KGB? My paranoia mounted, but I tried to sound businesslike: “Is this the Pan Am office?” “Yes,” the polite voice answered. “And why does Pan Am want me to got to shul? “Well, please come,” said the voice. I asked if there was any message regarding my itinerary—”No, but please do come to the synagogue.”

It took me some time to steady my nerves before attending the opening ceremony of the conference in the Carolinum, the magnificent medieval hall of the university. I hardly listened to what was said. I looked at the city map I had been given at the registration desk and was reassured to find that it clearly had a Magen David sign on the site of the synagogue. It was obviously a legitimate tourist site, so I decided to proceed according to plan.

This was August and sundown was late, so when I arrived at the Altneuschul night had not yet fallen. Unlike today, when the synagogue has been cleaned up and whitewashed, its walls were dark and sooty, and one couldn’t see the upstairs vestibule, where the remains of the golem were supposed to be. The mysterious atmosphere reanimated my feelings of unease. I spotted the sexton, introduced myself as a guest from Jerusalem attending an international conference at the university, and told him that it was my father’s yahrzeit. He welcomed me and asked whether I would join them in the community hall for a Sabbath meal after services. I was encouraged by his hospitality and his obvious comfort in speaking with an Israeli, so I told him about my strange phone conversation with the supposed representative of Pan Am.

The sexton smiled broadly and said: “Oh, my son, he’s doing it again. He will be here for the meal, so he will explain it all to you.” I was relieved, but not entirely. It didn’t sound right. The sexton’s son and Pan Am? It sounded like a parody of the Zionist-imperialist plot.

After services, a young man came up to me, introduced himself as the sexton’s son and said, with a smile reminiscent of his father’s, “My father told me you’re a little nervous. It is all very simple.” Apparently, Pan Am had been allowed by the Czech authorities to open an office in Prague as long as a Czech national headed its office. Who better suited than the son of the sexton of the Altneuschul? He obviously knew languages, must have some international connections, and might even know more than the average Czech citizen about airline routes and rates of exchange. So, he explained to me that every week he checked the list of passengers on incoming flights. If he saw someone with an itinerary that included Israel, or who had an obviously Jewish name, he tried to locate him through ÄŒedok, the Government Tourist Bureau, and issue an invitation to the Altneuschul. “You see, we barely have a minyan, so this usually helps us to get enough people for Sabbath services. I am sorry I caused you some panic—I noticed it on the phone.”

So the mystery was solved. Or was it? I was deeply moved by this example of Jewish ingenuity and solidarity—keeping a minyan on Friday night at the Altneuschul in the depth of Communist repression. But then, a Czech national working for Pan Am would obviously be under the surveillance of the StB; he might even be reporting to them in one way or another. He might actually be getting the list of presumably Jewish visitors to Prague from the StB, or collecting it for them.

So the looking-glass mystery was perhaps not solved to my total satisfaction, but over the kosher meal at the Jewish community’s restaurant, more reminiscent of a soup kitchen than a proper restaurant (tamkhui would be the right Hebrew word for it), I was able to ponder another manifestation of the mysteries of Jewish existence. 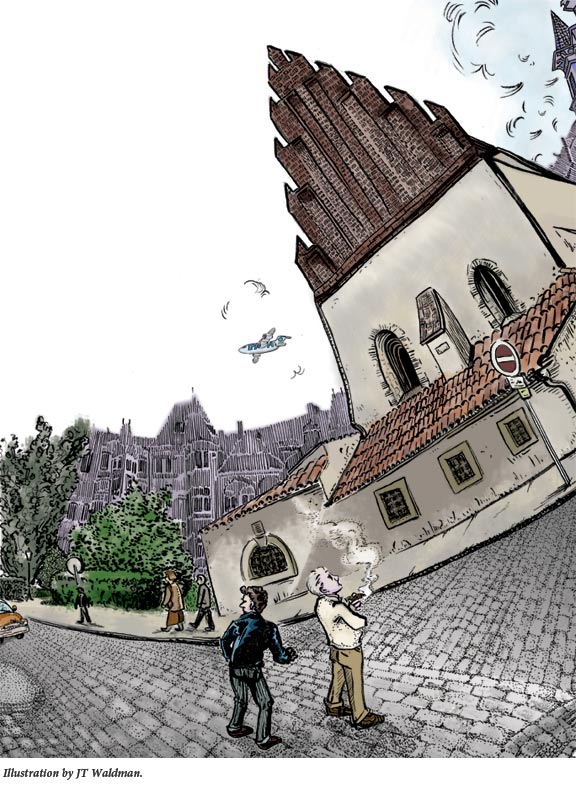 Saturday morning, I saw Herbert Marcuse having his breakfast at the hotel. I joined him at his table and told him I saw there was a message for him to call Pan Am. “Yes,” he said, “I did indeed call them, and some meschiggener told me to come to services at the synagogue.” I replied that he obviously didn’t go, since I hadn’t seen him there. As expected, he replied that of course he wouldn’t go to prayer services at a synagogue. “But,” I decided to try this out, “you must have been to the Altneuschul before?” A little uncomfortably he admitted that no, he had not visited the Altneuschul. Some further questioning elicited the reluctant answer that he had visited Prague frequently from the l920s until he was forced to flee Germany. In my Israeli chutzpah I said: “You must have visited St. Vitus Cathedral—it’s such a gem of Gothic architecture. But perhaps you would have found some interest in early Jewish Gothic archiecture as well—after all, this is now the oldest surviving synagogue in Europe, after the Nazis burned down the Worms synagogue on Kristallnacht.”

He got the point. “So why don’t the two of us visit the synagogue together—not today, on the Holy Sabbath, but perhaps tomorrow? Be my guide,” he added graciously.

So that’s how Herbert Marcuse and I went together to see the Altneuschul, admiring, among other features of this exquisite building, the Jewish attempt to avoid having a cross in the Gothic vaults by adding a fifth, architecturally unnecessary, arch to the four that make a cross.

The conference itself was something of an anticlimax, though the fact that it could be held in Prague at all was a sign of the dawning of what would later be called the Prague Spring. My own paper, on Hegelian elements in Marx’s 1844 Economic-Philosophical Manuscripts, was harshly criticized by the Soviet Marxist theoretician Teodor Oizerman as an “idealistic misinterpretation” of Marx. However, some Czech and East German students were bold enough to approach me after the session and said quite openly that the Soviets “don’t know their Hegel, and hence do not understand Marx,” which was certainly true.

Many years later, in l979, I visited the University of California, San Diego, where Marcuse was then teaching. It was spring and the Marcuses hosted my family for the Passover seder. Marcuse told the story of how the two of us had admired the early Jewish Gothic architecture of the Altneuschul in Prague years ago. Pan Am was not mentioned. 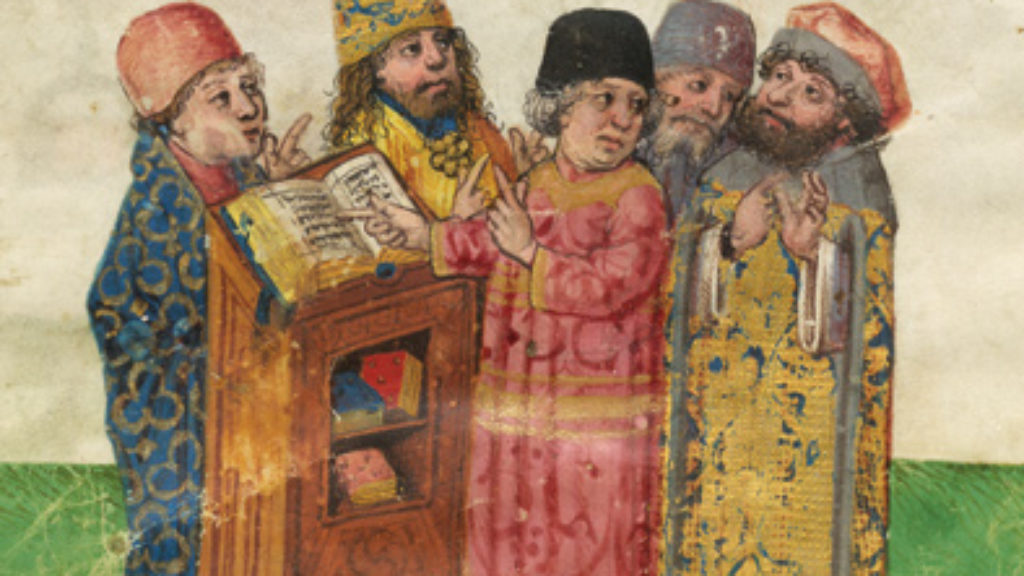 Underground Man: The Curious Case of Mark Zborowski and the Writing of a Modern Jewish Classic

Life is with People is perhaps the most well-known work of shtetl nostalgia. But how should it be read in light of its author's bloody career as one of Stalin's best spies?