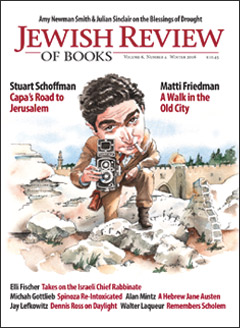 Would the demise or even disappearance of human beings be, on the whole, a good thing. Yuval Noah Harari seems to think so, or is at least willing to entertain the thought.

The way out is clearly marked: Intense Talmud study leads to intense study of science and philosophy. Spinoza was (in fact, sometimes still is) a crucial step along the path out.

Ross shows how the U.S.-Israel relationship has survived, and even thrived, since 1948 despite the radically different approaches taken by successive presidents.

Not by the Rivers of Babylon

It turns out that Israel sits on a “saddle point” between four weather systems. The rabbis of the Talmud didn’t know that, but they did have some interesting things to say about rain.

Sadat in Jerusalem: Behind the Scenes

The outcome of Anwar Sadat’s 1977 visit to Israel was historic, but the backstage wrangling over protocol and Palestinian participation was also significant.

New books about Gershom Scholem and his brother Werner evoke memories of 28 Abarbanel Street in Jerusalem.

Your Time Is Up: Jabotinsky at the Sixth Zionist Congress

The young Jabotinsky didn’t exactly take the Sixth Zionist Congress by storm. When he approached Chaim Weizmann, saying, “I hope I am not intruding,” Weizmann replied, “You are.” A newly discovered text, edited by Brian Horowitz and Leonid Katsis.

A Harem of Translators

Singer insisted that all foreign-language translations of his work be based on the English versions. And most of them were done by young women who closer to typist-editors than true translators.

A Cipher and His Songs