The Greek city of Thessaloniki is no stranger to anti-Semitism, but the January attack on the Holocaust monument that commemorates the vast Jewish cemetery—once the largest in Europe—on which Aristotle University stands was still shocking. The smashed plaques were left in worse condition than many of the fragments of old Jewish tombstones that became building material in the wake of the Second World War and that still crop up across the city. Unlike the 2017 vandalism of the monument (about which I previously wrote in the Jewish Review of Books), this attack seems to have been motivated by national politics and to have been the work of more than one perpetrator.

“Even if they vandalize the monuments one hundred times we will repair them one hundred and ten times,” pledged Yiannis Boutaris, the mayor of Thessaloniki. The two extremes—anti-Jewish actions and expressions of remorse and solidarity—characterize the climate in Greece today, a place where the weight of history—and its absence—is profound.

In 2014, the Aristotle University, together with the Jewish Community of Thessaloniki and Boutaris’s office, had agreed to officially break seven decades of silence and acknowledge that the university campus was built on the Jewish cemetery after its desctruction. A modest but stirring monument was erected on a rather obscure part of campus. But even in this courageous act, the full truth remained too much, and the monument’s inscription attributed the destruction of the cemetery to the “Nazi occupation forces and their collaborators.” As I wrote in an earlier article,“the painful truth is that the municipality and the Aristotle University of Thessaloniki benefitted from the Nazi occupation to implement a plan, under development for more than a decade, to expropriate the Jewish cemetery and expand the campus of the university on top of it. At the municipality’s expense, five hundred workers with pickaxes laid waste to the Jewish cemetery of Salonica in December 1942.” Approximately 350,000 graves, dating back to the 15th century and, in some instances, the Roman era, spread out over 86 acres of land, were destroyed.

According to Greek government statistics, vandalism of Jewish sites has been on the rise. The recent redesecration took place on January 25, two days before International Holocaust Remembrance Day. The timing may be only a coincidence, but the vandalism—attributed to far-right fascists and Golden Dawn sympathizers—was likely linked to a heated vote in the Greek parliament that took place that very same day—and had nothing to do with Jews.

Still suffering from the financial crisis and pressured by the refugee crisis, the Greek government led by the Syriza (“The Coalition of the Radical Left”) embarked on the landmark Prespes agreement with its neighbor, the Former Yugoslav Republic of Macedonia, to resolve a longstanding dispute over the latter’s name—now the Republic of North Macedonia. As the name Macedonia evokes the glories of an ancient past claimed by Greeks—Alexander the Great of Macedon and his parents Phillip II and Olympias—successive Greek governments and the citizenry at large generally refused to acknowledge their neighbor’s claim to the name. Since before World War II, Thessaloniki has played a central role in the debates both as the historic capital of a region known as Greek Macedonia and due to fears that acknowledging the Republic of North Macedonia’s claim to the name could legitimize irredentist aspirations.

Those in Greece who opposed the Prespes agreement—especially those on the right but also moderates—have unsurprisingly found in “the Jews” a convenient scapegoat for this alleged national betrayal. In a country known for conspiracy theories, it is perhaps no surprise that demonstrations against the agreement were rife with anti-Semitic slogans. At Syntagma, the main square in Athens, in front of the Greek parliament itself, a banner read: “[With] Jews and people from the Balkans in the Parliament, you are screwed.” (Notably, there are no actual Jews in the Greek parliament.) The destruction of the Jewish cemetery monument took place on the exact same day that the Prespes agreement was signed, and three previous desecrations of another Holocaust monument, in downtown Thessaloniki, over the past six months coincided with earlier demonstrations against the agreement.

The unexpected connection between nefarious Jews and Macedonian usurpers has a history. The first major act of anti-Jewish violence perpetrated in the history of Thessaloniki transpired in 1931, also amidst an economic crisis. The pretext was that representatives of Makabi, Thessaloniki’s Zionist soccer team, had allegedly participated in a summit in Bulgaria to plot to unify Macedonia and seize Thessaloniki from Greece. Agitated by the local press’s vitriol, a group of Greek ultranationalists invaded a Jewish neighborhood, torched dozens of homes, and ransacked the Makabi headquarters. This first pogrom in Thessaloniki’s history left three dead; no one was ever convicted for the crimes. A decade later, some of the same ultranationalists collaborated with the Nazis.

Mob violence against Jews in Thessaloniki or Greece more generally today is unlikely, if only because there are so few Jews (a thousand in Thessaloniki, a city of a million; and five thousand in Athens, a city inhabited by 3.75 million), and there are no longer Jewish neighborhoods that stand as ready targets. Holocaust monuments and cemeteries have instead borne the brunt of the animus and will likely continue to do so.

What is different today is that Greek government officials and party representatives are more likely to condemn the vandalism of Jewish monuments. Part of the reason is an increased commitment to fighting anti-Semitism, racism, and xenophobia on the part of figures like Mayor Boutaris, who has been beaten up in public for expressing solidarity with immigrants and Jews; part has to do with the interests of realpolitik emerging from strengthened Greek-Israel relations.

As the last country in the European Union to formally recognize the state of Israel—in 1990—Greece has recently warmed up to the Netanyahu administration. Because of the cooling of Turkey-Israel relations in the wake of the Mavi Marmara affair in 2010, Greece and Israel have been conducting joint military training exercises, collaborating on cybersecurity and satellite technology, and, most significantly, a plan, together with Cyprus, to create a $7 billion natural gas pipeline across the Mediterranean. In addition, Israeli tourism to Greece continues to climb.

Given the friendly Greek-Israel relationship, the recurrent anti-Jewish acts in Greece are an embarrassment. Netanyahu’s administration applauded Greece’s decision to endorse the Prespes agreement while also condemning the latest cemetery monument desecration. While in a prior era, such vandalisms would pass by uncommented upon by the government, or at least would without Jewish communal pleading, now officials representing most parties are quick to denounce displays of anti-Semitism, if only to save face with their new strategic partner.

The pro-Israelism of the Greek government is echoed in a burgeoning popular philo-Semitism that sits alongside, indeed partakes in, the resurgent anti-Semitism. Editorials in Greek newspapers laud Israel as the model nation-state that Greece ought to emulate. “The Jews” are portrayed as powerful, successful, and famed for their “academic excellence, scientific progress, business innovation and political influence.” Israel is further admired for its strong borders and unflinching nationalism.

When it comes to Holocaust commemoration and anti-Semitism, the new geopolitics are changing the discussion. In February, at an event celebrating an Orthodox Christian man deemed one of the “Righteous Among the Nations” by Yad Vashem for saving a prominent Greek Jewish family, the Greek Ministry of Education announced its adoption of the International Holocaust Remembrance Alliance’s capacious definition of anti-Semitism, which some critics see as seeking to stymie criticism of Israel. The International March of the Living will highlight the Shoah in Greece this spring, for the first time, and the famous Israeli singer Yehuda Poliker, the son of a Salonican Holocaust survivor, will participate.

As for the fate of the shattered monument at Aristotle University, Mayor Boutaris has proposed not only that it be restored (likely from the coffers of the Jewish Community alone), but also that 24-hour surveillance be established to monitor that site and others of Jewish significance. The president of the Jewish Community, David Saltiel, however, has refused to go along with the suggestion. It would be a “disgrace for the city,” he argued, if the only way such monuments could be preserved would be for a policeman to stand guard. He would accept better lighting and better management, but nothing more. After all, the purpose of the monument, Saltiel said, is to “remind us of history.”

As the descendant of more than a dozen generations of Salonican Jews, I hope that the city and university will seize the opportunity to do precisely that: to choose history over willed amnesia. When the memorial is rededicated, the inscription should acknowledge the truth, however hard it may be to do so, of who was really responsible for the cemetery’s destruction. Perhaps only with such an act of courage and truth will the city, once known as the “Jerusalem of the Balkans,” be able to own its history, and the Jews buried beneath its university begin to rest in peace. 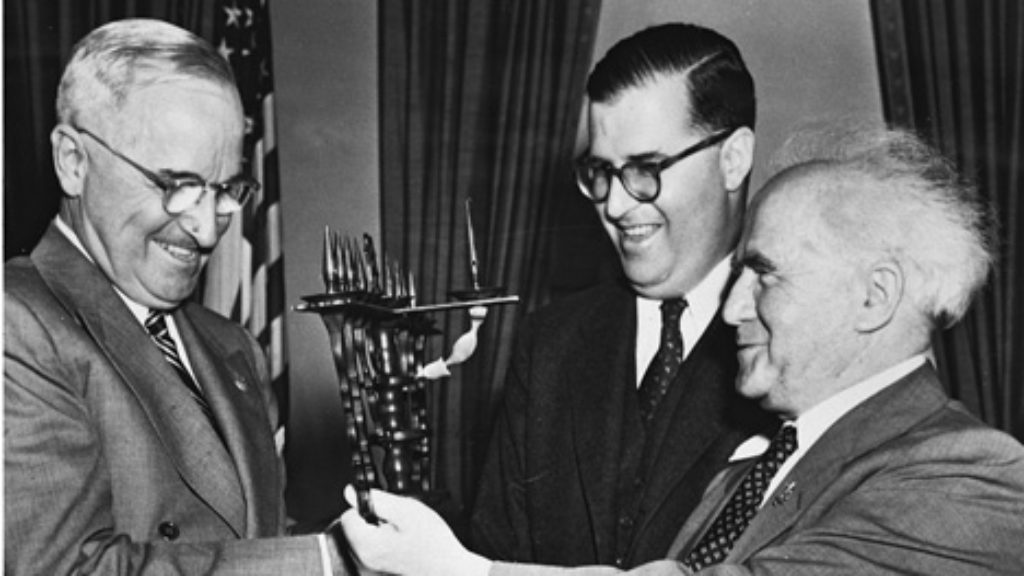 Ross shows how the U.S.-Israel relationship has survived, and even thrived, since 1948 despite the radically different approaches taken by successive presidents.