The Lost Shtetl: A Novel

Loneliness can be an affliction, like typhus or pneumonia,” says the unnamed narrator of Max Gross’s quick-witted debut novel, The Lost Shtetl, “and it wasn’t long before Kreskol came down with a serious case of the disease.” And no wonder: the Jewish town, located deep in a Polish forest, hasn’t received so much as a postcard from the outside world in more than a century. Life in the village has proceeded virtually untouched by the Holocaust, the Cold War, and the Internet age. But everything changes when the newly divorced Pesha Lindauer disappears along with her violent ex-husband, Ishmael, raising fears that there may have been a murder in Kreskol. Young Yankel Lewinkopf—the baker’s apprentice, “an orphan whom nobody would miss”—is tasked with venturing beyond the town to alert the Gentile authorities. With the help of some traveling Roma, he makes it to the nearby town of Smolskie.

What begins as a screwball story of a modern Chelm and its wayward son soon takes a turn for the (somewhat) serious. When, after a lengthy psychiatric hospitalization, Yankel is found to be telling the truth about Kreskol, the small village becomes a national cause celebre. Could a Jewish town really have escaped Nazi notice? Could it all be an elaborate scam? Before long, the shtetl is inundated with reporters, tourists, and bureaucrats who want to wrench the Jewish town—and its inhabitants—into the modern era and the Polish state.

You’d think this sort of third- or fourth-generation, oh-so-clever riff on shtetl nostalgia wouldn’t work, let alone be sometimes rib-crackingly funny, but Gross pulls it off with the kind of flair that Seth Rogen—whose recent turn as an Ashkenazi Rip Van Winkle in An American Pickle showed just how unfunny such a premise could be—should envy. In part, it’s a matter of commitment. Gross’s novel is well thought out (especially when it comes to explaining what bizarre agglomeration of events might have led to the town’s isolation in the first place), and he’s willing to dive deep into all the possible effects of his alternate history premise. Not just the obvious stuff (like the townspeople mistaking Polish helicopters for the messiah) but also the consequences that might be several steps removed. Gross, a former writer for the Forward and New York Post, has a reporter’s eye for the way social, economic, and political factors line up like dominos. And he takes great pleasure in knocking them down.

Consider what happens shortly after the story of Kreskol’s rediscovery hits the newspapers:

One weekend a group of eighteen or nineteen American Jews (mostly in their fifties and sixties) who were touring Poland showed up in our town square. They sashayed through the streets like they owned them. “Shalom aleichem,” they said to anybody who they passed. . . . And when they arrived in the marketplace, cash in hand, and began buying up whatever trinket they could find to memorialize their expedition, nobody could find reason to complain.

The next weekend, four more groups arrive and storm the marketplace “with the animation of Norman invaders.” For a few blissful weeks, Kreskol’s merchants enjoy the best sales days of their lives, some earning as much as six months of their yearly income in a single afternoon.

“Don’t get too comfortable,” warns the village’s postman, newly returned from several months of training and acculturation in Warsaw. “Things are good now, but it will end badly.” He is proven right when the Polish government brings in an economist who warns that Kreskol’s currency is useless. To integrate Kreskol into the modern Polish economy and prevent years of financial woe, the Polish government offers 37.8 modern zlotys for every prewar zloty recovered (this does little for the merchants, whose “riches” were made in the tourists’ new money). But this plan requires the cooperation of the villagers, not all of whom are convinced the Poles are trustworthy or that integrating further into modern Poland is a good idea for Kreskol’s traditional way of life.

In a move that recalls the old joke about the desert island Jew with two synagogues, the town splits in two. “One,” the narrator says, “grew wealthy. The other grew poor. The poor sneered as they walked past their neighbors. . . . They stopped having anything to do with any of the rabbis of the beit din (except Rabbi Katznelson, who never changed his savings) and attended smaller, more fanatical shuls.”

A lesser writer might have left things there—the town in disarray, the zealots in uproar—but Gross has a keen eye for situational comedy. Before long, there’s a group of black-clad, bearded anti-Zionists in Kreskol, explaining that Israel was a historical mistake and never should have been settled before the messiah arrived. Though initially friendly—“A dozen single Israeli men and five families . . . bestrode the town like they were our long-lost brethren, greeting every weaver and glassblower with a hearty ‘Shalom!’”—the spirit of brotherhood is not long for the lasting, and “after they heard of the rift that had taken place within our town, they instantly took the Katznelson side, and stopped speaking to the rest of us.”

Gross’s humor is thoroughly Jewish and a little irreverent. Yankel’s tefillin, for instance, cause “a great deal of commotion” among the psychiatric staff at Our Lady of Mercy Hospital, who see the leather-strapped boxes as a possible clue to Yankel’s carnal proclivities. Later, an Israeli government representative invites a delegation from Kreskol to the Holy Land on an all-expenses-paid trip, assuring them that they’ll find the accommodations—at the King David Hotel—more than satisfactory: “‘It’s the finest hotel in Middle East,’ he declared—before adding, ‘west of Abu Dhabi’”—which, of course, means nothing to them.

But it’s not all just silliness. Consider what happens when, after the world has already begun to doubt the authenticity of Kreskol, a swastika appears on one house in the village. The vandalism seems like the beginning of a dreadful decline in Kreskol’s relationship with its Gentile neighbors (and indeed, it is). But in a darkly comedic moment, the villagers, having missed World War II, need to have the insult explained to them.

So, Gross is funny and good at working out the consequences of his absurd premise, but how does he do with life inside Kreskol? Is this what a shtetl of a century or more ago would have been like? I’m no expert, but occasionally there are stumbles. Astute readers might have noticed that the Neturei Karta figures above probably would say something more like “Shulem Aleychem” to the Kreskolites, not a typical Israeli “shalom.” And one mention of tefillin in the book seems to suggest Yankel’s are composed of a single box rather than two. And, of course, as one of Gross’s early readers pointed out to him, it’s unlikely that any 19th-century shtetl Jew would have been named Ishmael (a point he chose to ignore for aesthetic reasons).

But overall, Gross has done his homework. The Lost Shtetl draws heavily on the prewar history of the town of Eishyshok, as described by Yaffa Eliach in her history There Once Was a World, borrowing the colorful historical details that give his fantastical story a realistic texture. Some of these details are minor, like where the townsfolk cooked their Shabbos cholent (the baker’s oven, of course) or the number of divorces such a town might have seen over a 20-year period (just six). But others are more significant, like the strict social hierarchy and the fact that in Kreskol, as in Eishyshok and many other shtetls, the role of the town’s dayanim (judges) often extended far beyond legal proceedings, including issues such as supervising the rebuilding of the community synagogue and smoothing over marital disputes. (Gross even adopts, as a bit of Kreskol history, one of Eishyshok’s real-life marital disputes, in which a young wife was accused of witchcraft.)

Gross does just as well, if not even better, with his portrayal of life outside the shtetl, depicting the novel’s modern Polish context with a kind of realism that, by virtue of the real world’s madness, almost approaches satire. He has clearly thought carefully about lingering antisemitism and the modern-day Polish government’s rejection—in fact, criminalization—of any suggestion of Polish complicity in Nazi genocide. Thus, when Kreskol is first discovered, the Polish press, government, and public waste little time in issuing accusations of fraud and speculating about whether the village may be an international Jewish plot designed to trick Poland into paying Holocaust reparations.

Even more interesting are the places Gross taps into something a little more subtle than outright enmity or historical denial: the deep, squirming discomfort felt by decent, ordinary Poles when forced to confront the legacy of the Holocaust. Consider the following conversation between the psychiatrists at Our Lady of Mercy Hospital. Kreskol, at this point, is still thought to be a delusion from the mind of their patient, Yankel. But the doctors have recently come to believe that he is telling the truth when he claims to have no knowledge of 20th-century art, music, history, or technology.

And as they spoke of modernity, in all its variety and splendor, a sinister thought appeared in Dr. Babiak’s mind: “Do you think he knows about the Holocaust?”

The question dangled in the air for a few moments, ominously, everyone too frightened to furnish the obvious answer.

“Shouldn’t we tell him?”

No one quite knew the proper response.

“Why is it up to us to tell him these things?” asked one doctor. “We aren’t here to educate him in European history.”

“Well, of course not,” said Dr. Babiak, “but don’t you think an observant Jewish person would want to know that kind of thing?”

“Not everybody cares about history,” Dr. Meslowski offered.

But no one believed that the Holocaust would be an issue of no importance to a man who had devoted every waking second of his life to being a devout Jew . . .

“But how do we explain it all to him?” Dr. Babiak asked. “All these events happened so long ago. How do you let him know how important they were?”

“Maybe we should just show him Schindler’s List,” one doctor suggested.

The Polish doctors don’t see the irony, but we do.

Poland’s failure to grapple with the Holocaust drives The Lost Shtetl to its disquieting conclusion, which I won’t reveal. However, I will note that this is where Gross’s fantastical premise is at its most effective. For it’s the very fact of the book’s fantasy that makes many of its other elements both so funny and so heartbreaking, as though even in this wild, improbable alternate reality, some truths cannot be changed. 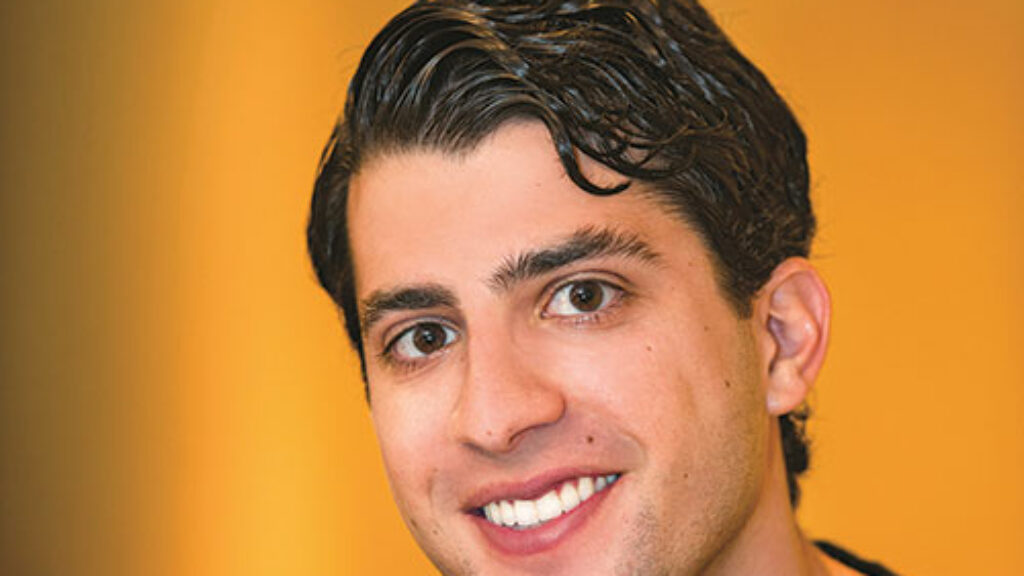