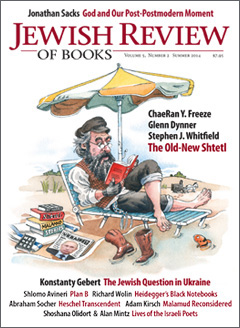 "If I had to choose between Hitler and Stalin, Adam Michnik once said, I pick Marlene Dietrich." Vladimir Putin's propaganda notwithstanding, this is not the choice facing Ukrainian Jews.

Nostalgia for the Numinous

In the beginning there were the angry atheists. Terry Eagleton is more melancholy: “Atheism is by no means as easy as it looks.”

Not writing what you know can help an author steer away from autobiographical shoals, but it puts a certain research burden on the writer.

How should we think about the Eastern European market town? Did the shtetl ever have a golden age?

Wonder of wonders! One of the most beloved musicals ever created far outstripped its own creators' expectations for its success.

When it was time for new MK Ruth Calderon to speak to Knesset for the first time, she told a Talmudic story and created a YouTube sensation. Her book has now been translated.

Rallying Round the Flags

Derek Penslar's new book returns to aim Jewish soldiers of the diaspora to their rightful place in Jewish history.

National Socialism, World Jewry, and the History of Being: Heidegger’s Black Notebooks

The thinking reflected in Heidegger's recently published notebooks from the 1930s is alarmingly crude. It is also much more difficult to separate from his philosophy than many would like to think.