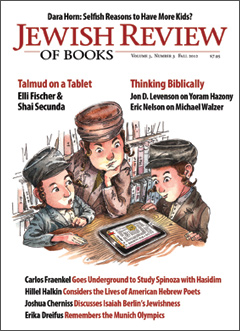 The last paragraph of Hillel Halkin’s review of Alan Mintz’s book (“Poets of the Tribe,” Fall 2012) leaves the reader with the false impression that Hebrew poetry in the United States died with the demise of Gabriel Preil in 1993. My first reaction to this conclusion was: “What am I? Chopped liver?” My second reaction was, “Oh, well. Here we go again.”

Either Halkin knows of my work and is dismissive of it, which is his prerogative, or (and I suspect this to be the case) he is unaware of it. If he is unaware, then he has most likely failed to read Michael Weingrad’s American Hebrew Literature, published in 2011 by Syracuse University Press. There, Weingrad devotes a considerable portion of Chapter 7 to Preil’s work as well as to mine.

It is embarrassing for a writer to have to write a letter to the editor of a publication such as the Jewish Review of Books informing him that he has been writing Hebrew poetry for the past thirty-seven years and that your reviewer may not be as well informed as he should be. True, Mintz’s book deals only with the generations of now deceased American Hebrew poets (although Mintz makes a kind reference to me in his Preface). In short, Halkin’s sweeping conclusion about the present and future of Hebrew writing in America is simply not true, yet—and not as long as I am alive, at least.

Ironically, Halkin’s late uncle, Simon Halkin, was instrumental in helping get my first book of poetry, Orvim humim (Brown Crows), funded and published in 1976 (he, along with Aharon Megged, Yossi Gamzu, Tzvi Luz, and Itamar Yaoz-Kest). I have kept our correspondence. My second book, Efes makom (No Room on the Bus), came out in 1981. After a twenty-five-year hiatus, I published my third book in 2007, Acharei ha-shtika (After the Silence), and my fourth book, Steps be-chorim shechorim (Tap Dancing through Black Holes), is coming out early next year.

Again, this is all very embarrassing. One generally does not find comfort in informing people of one’s existence, especially those who are presumed to be experts in their field.

Happily,  there is a third alternative to Robert Whitehill-Bashan’s “either/or.” I did know about his poetry but not about his most recent collection of it, published in 2007, and since his previous collection came out in 1981, he had, as far as I could tell, disappeared from sight considerably before the death of Gabriel Preil. (Not for nothing is the 2007 volume called After the Silence.) I’m delighted to hear that he is still with us. He’s not only a very skillful poet, which is rare enough, he’s an often very funny one, which is even rarer. Yet his own case excepted, he agrees that the age of American Hebrew poetry is over. In a 2010 essay in Ha’aretz that recently came to my attention, he wrote: “There was once a ‘Hebraist movement’ in America, but no more. The center of Hebrew poetry in America is now the second-floor study of my home.” Long may it flourish there.

Exodus on a Banana Boat?

I find it difficult to believe the statement in the review of Rich Cohen’s The Fish That Ate the Whale (“Tough Bananas,” Fall 2012) that “strong evidence points to one of the ships, a former United Fruit freighter, being the Exodus.” With all due respect to Samuel Zemurray, the United Fruit Company, and its banana boats, it is inconceivable that the Exodus was ever one of them. Originally built as a Chesapeake Bay passenger/freight boat that was limited to trips between Baltimore, Maryland, and Norfolk, it was named President Warfield, for the head of the company. During World War II the vessel was acquired by the U.S. Navy and saw service during the invasion of Normandy in June 1944.

In his well-documented book Exodus 1947, author David Holly names the Jewish shipping magnates instrumental in acquiring the President Warfield and its conversion to the Exodus. Zemurray is not one of them. Two former banana boats in service of Zemurray’s United Fruit Company did serve during the same period and in the same Jewish refugee service as did the Exodus. Perhaps the author, or reviewer, confused them. They and those associated with them should be remembered for their service to Israel and the Jewish people.

In The Fish That Ate the Whale, Rich Cohen writes that three ships purchased to bring Jews into Mandate Palestine were tied up in the port of Philadelphia over missing exit papers. They were released after Zemurray “made a few calls.” He goes on to write that one of the three, “purchased with money partly donated by Zemurray, was the Exodus.” In support of this, he quotes Thomas P. McCann, author of An American Company: The Tragedy of United Fruit: “Zemurray helped raise the purchase price and pushed through the registration of the Exodus.”

Cohen has made this claim before, albeit qualified. In Israel Is Real, he writes, “Now I am going to focus on the Exodus . . . It was the very same ship Zemurray had used to haul his ripes up and down the Mississippi.” In a footnote he continues, “This detail is so stunning that I’ve spent hours in the archives trying to nail it, figuratively, to the mast. Though the lore does indeed have the refugees crowded into the Banana Man’s first boat, many skeptics say it was more likely another, less storied ship from the Zemurray fleet.”

Both the skeptics and Mr. Schriebe are right, and I thank him for the correction. The Dictionary of American Naval Fighting Ships, compiled by the U.S. Department of the Navy and available online, identifies the Exodus as having previously been named the President Warfield, a packet steamer that was used by both the British and U.S. navies during World War II before being acquired by Potomac Shipwrecking Company of Washington, D.C., which purchased it on behalf of the Haganah.

I read Carlos Fraenkel’s memoir of studying philosophy with secretly heretical Hasidim (“Spinoza in Shtreimels: An Underground Seminar,” Fall 2012) directly after the article about the new Talmud apps for the iPad, and the contrast—two stories about the life of ancient texts in the modern world—was striking. I don’t think I ever could have imagined that an account of what really amounts to one of those old Chicago Great Books courses could have been as poignant and troubling as Professor Fraenkel’s article about teaching Plato and Nietzsche to Satmars and Lubavitchers.

We and I; It's a Novel: An Exchange