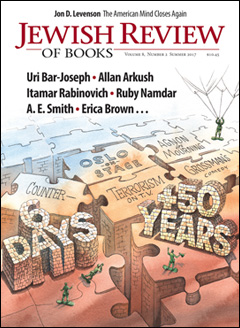 Ben-Gurion's Yiddish, Foucault on Yom Kippur, Rabin's Solution?, The Lamp and the Flame

A “New History” and Old Facts

Fifty years after the conflict, Guy Laron’s The Six-Day War: The Breaking of the Middle East attempts to upend our understanding of the hostilities.

When contemporary Jews of priestly lineage avoid cemeteries, when ordinary Jews wash their hands before eating, or immerse themselves in ritual baths, they are acting according to the dictates of an ancient system.

Theater and Politics in Oslo

Veteran Middle East negotiator Itamar Rabinovich gauges the distance between drama and diplomacy in his review of Oslo.