“Do not urge me to leave you, to turn back and not follow you. For wherever you go, I will go; wherever you lodge, I will lodge; your people shall be my people, and your God my God” has been understood by some as an ancient form of conversion, a pledge of allegiance. Other interpreters suggest Ruth was expressing familial loyalty to Naomi even though she was no longer her daughter-in-law. And intertextually inclined readers have pointed out that we are told that Ruth “clung” to Naomi, a word used to describe the marriage of Adam and Eve, suggesting that on some level, their relationship replaces the one between Ruth and Naomi’s deceased son, Mahlon. Yet, while there is some truth to each of these interpretations, they miss something both deep and obvious: Ruth and Naomi are friends.

The Peshitta, an early Syriac translation of the Bible, suggests that Ruth’s name stems from Re’ut, the Hebrew word for “friendship.” This is more than just playful etymology, or rather if it is, it is the author who is being playful, not the interpreter. The book of Ruth is rife with symbolic names. In the first chapter, Naomi breaks the fourth wall and tells the people of Bethlehem to call her “Bitter”—the opposite of the literal meaning of her name (“pleasant”). The names of her two sons, Mahlon and Chilion, whose deaths set the plot in motion, can be rendered in English as “obliterated” and “eliminated.” Ruth’s name, by contrast, doesn’t predict her fate; it describes a relationship and a virtue.

“They stand together in an immense solitude. . . . We picture lovers face to face but Friends side by side; their eyes look ahead,” writes C. S. Lewis in Four Loves. This is how the Bible depicts Naomi and Ruth after she has declared her intention. They have mourned together and are now setting off on the 50-mile journey from the plains of Moab to Bethlehem, toward an uncertain future—alone but side by side.

“Friendship is—in a sense not at all derogatory to it—the least natural of loves; the least instinctive, organic, biological, gregarious and necessary,” Lewis argues. And Naomi agrees: it isn’t natural or prudent for Ruth to want to go with her to Bethlehem. After all, she has nothing more to give her as a mother-in-law, certainly not more sons. It’s an argument that quickly convinces her other daughter-in-law, Orpah, Chilion’s widow. And yet, Ruth clings to Naomi. When Naomi and Ruth arrive in Bethlehem (literally the “house of bread”), there are no invitations for room and board. So Ruth offers to glean for both of them in the fields of strangers. There, she stumbles across a man named Boaz, and Ruth, who recognizes him as a relative, sees their chance. It is Boaz, a potential lover who doesn’t even need to love (the text never uses the word to describe his feelings toward Ruth), who, the women realize, offers the possibility of salvation. As Lewis writes, “Lovers seek for privacy. Friends . . . would be glad to reduce it. The first two would be glad to find a third.”

Naomi offers instructions as Ruth heads toward the scene on the threshing floor upon which her story turns. Yet Naomi’s orders contain a few discrepancies between how the Hebrew words are read (keri), according to Masoretic tradition, and how they are actually written (ketiv). Where the written words blur the identity between the two women, making it seem as if one is almost superimposed on the another, the tradition insists upon keeping them distinct:

So bathe, anoint yourself, dress up, and go down [written: and I will go down] to the threshing floor. But do not disclose yourself to the man until he has finished eating and drinking.

When he lies down, note the place where he lies down, and go over and uncover his feet and lie down [written: and I will lie down]. He will tell you what you are to do. (Ruth 3:3–4)

In the text as it is written, it is as if, at this crucial moment, Naomi’s shadow is draped upon Ruth. Borrowing an anthropological phrase from Marshall Sahlins, their friendship now constitutes a kind of “dual unity.”

In the final chapter, Boaz marries Ruth at the gates of the city. Their union, blessed by the formerly inhospitable residents of Bethlehem, produces a son named Oved. His name means “servant,” and he is, the book tells us in its final verse, the ancestor of God’s eventual servant David. And it is, of course, “David’s seed” whose eventual arrival is traditionally prayed for three times a day.

Ruth’s vow—a vow, above all, of friendship—is the root of our eventual redemption. 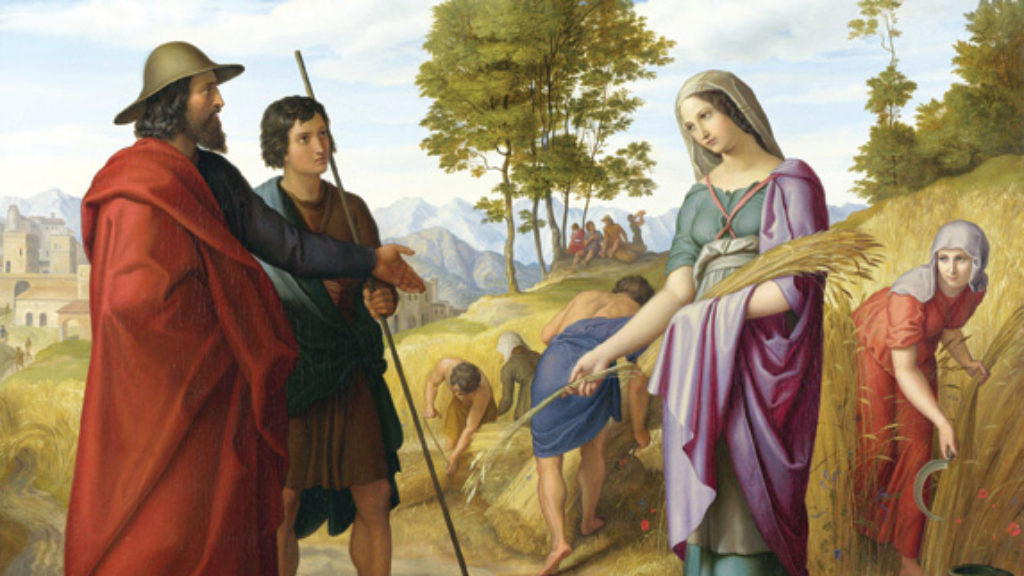 New Gleanings from an Old Book

Ruth, one of the shortest books in all of Tanakh, has a simple plot: A man from Bethlehem moves with his family to Moabite territory to ride out a famine in Judea, his two sons somewhat scandalously marry Moabite women, and all the men subsequently die.

The Rock from Which They Were Cleft

In the past few years, MK Rabbi Haim Amsalem has become more of a controversial figure in his own community, not to mention the Shas party he represents, than outside of it. In two monumental works of Jewish law, he seeks to impact the future not only of that community, but of Israel's Russian immigrants.