Sometime after World War II, Humphrey Bogart, or rather Frank McCloud, goes out to the Florida Keys to visit the father (Lionel Barrymore) and young widow (Lauren Bacall) of a soldier who had been under his command in the Battle of San Pietro. The soldier’s father asks McCloud to tell him something about how his son died.

McCloud: Three days and three nights he stayed awake directing our fire. Most of that time I was on the other end of the line. To keep himself awake, he talked into the phone. Talked and talked . . . Most of his talk was about you two. You’d be surprised how much I know about you both. For instance, inside your wedding ring there’s an inscription: “Evermore.”

Frank McCloud: And you, Mr. Temple. Remember telling George what this hollow is above the upper lip? Before he was born, you said, he knew all the secrets of life and death. And then at his birth, an angel came and put his finger right here [touching his upper lip] and sealed his lips.

James Temple: I remember that! Yep. He couldn’t have been more than seven years old when I told him that fairy story.

I’ve wondered on and off over the years just how this Jewish legend ended up on Bogart’s lips. Key Largo (1948) is based on Maxwell Anderson’s play of the same name, but Anderson was the son of a Baptist minister. As far as I know, there is no Christian version of this just-so “fairy story” of how the baby got its philtrum—which is the name of that little, centered hollow we all have above our lips. It also doesn’t sound like Anderson. I was reminded of this and related mysteries recently while gazing at my most recent granddaughter, a gray-eyed infant who gazed back with a somber, seemingly knowing look.

As it turns out, there isn’t much of a mystery as to how Anderson got ahold of the story: He didn’t. John Huston, the film’s director, hated Anderson’s play—“That son of a bitch, he can’t write!”—and worked with a young screenwriter named Richard Brooks to rewrite it from scratch. And Brooks was born Ruben Sax, to Russian-Jewish immigrants, so I’d be willing to bet that he is the source of this little bit of mythological stage business. But there is, it turns out, a mystery as to the origin of the myth itself.

Over the last few weeks, I’ve asked a couple of dozen Jews, men and women, scholars and laypeople, raised in homes ranging from secular to Orthodox, whether they heard this story growing up. Most of them had. The literary scholar Howard Schwartz recently retold it in a children’s book called Before You Were Born. Schwartz, like seemingly everyone else, traces it to a famous talmudic discussion of the embryo and soul before birth and developments of the story in later rabbinic literature, but that’s not quite right.

Rabbi Simlai, a talmudic preacher who is most famous for saying that there are precisely 613 commandments in the Torah, taught that the embryo sits in its mother’s womb like “folded writing tablets, its hands rest on its two temples, its two elbows on its two legs, and its heels against its behind.”

There is no time in which a man enjoys greater happiness than in those days, as it is said, “O that I were as in months gone by, in the days when God watched over me, when his lamp shone over my head, when I walked in the dark by its light” (Job 29:2,3) . . . [these are] the months of pregnancy. It is also taught the entire Torah . . . and it says “God’s company graced my tent.” (Job 29:4) As soon as it sees the light, an angel comes and slaps it on the mouth and it forgets the entire Torah. (Niddah, 30b)

An early medieval text, Midrash Tanhuma, adds several colorful details, including that the angel’s name is Laila (Night), but it is still a slap on the mouth, not a mythic caress.

If Rabbi Simlai’s myth explains any physiological mystery, it is, as a leading Israeli Yemenite rabbinic authority Rabbi Yitzhaq Ratzabi has pointed out, how the baby chooses a particular moment to enter the world and why it cries when it does. Ratzabi knows the legend of the philtrum, but dismisses it as having no talmudic basis. Rabbi Chaim Kanievsky, the current reigning Ashkenazi authority among Israeli haredim, has been quoted to similar effect. But they both know the legend and neither of them saw it on Netflix.

The philosophical point that seems to hover over this talmudic passage and its later elaborations is that learning is really an act of recall. As Rav Soloveitchik once wrote, “Rabbi Simlai wanted to tell us that when a Jew studies Torah, he is confronted with something . . . familiar, because he has already studied it and the knowledge was stored up in the recesses of his memory.” As Soloveitchik and others, including the 19th-century scholar Adolph Jellinek, who published an elaborate medieval version of the tale, recognized this seems to be a version of Plato’s famous theory of knowledge as recollection. However, it’s worth noting that although these texts speak of the unborn child as forgetting they don’t explicitly describe its later learning as remembering.

The Maharal of Prague came close when he suggested that the angel slaps the unborn child’s mouth to create “a lack and a desire,” by which he seems to have meant both a desire to nurse and a desire to learn. But the Maharal lived in 16th-century Prague when Plato was, once again, on every intellectual’s lips. Some 200 years later, Rabbi Elimelekh of Lizhensk explicitly argued that if we hadn’t learn Torah before we entered the world it would be impossible to grasp it now—a Hasidic footnote to Plato.

Certainly, the idea of learning as a recovery of what we once possessed is what makes Bogart’s bubbe mayse, and ours, so memorable: We can all touch that little hollow and feel the impress of forgotten knowledge. But—to repeat the question you may have forgotten amidst the flurry of sources—when did the angel’s slap become a gentle, indenting touch?

It may have been suggested by a reading of the Zohar’s parallel discussion in which the angel marks, or presses, the fetus on the mouth before it is born (the verb is roshem, and I am indebted to Joel Hecker for conversation on the point), but goes no futher. This could have provided faint inspiration for our story.

When did the actual legend of the baby’s hollow appear? Who created the just-so story that screenwriter Richard Brooks put into Bogart’s mouth? The answer is that I still don’t know, or, at any rate, can’t remember. (If you do, I’ll renew your subscription for free.) Brooks, one imagines, heard the story himself when he was also not “more than seven years old,” which would be around 1920, a few years before Rabbi Kanievsky would have heard it in Pinsk and a few decades before Rabbi Ratzabi would have done so in Kfar Saba.

If Brooks retold the story to his own child, it would probably have been in the ecumenical version of Key Largo, with the unborn child learning “secrets of the world” rather than the Torah. According to his biographer, when his wife, the actress Jean Simmons, asked him if they should bring up their daughter as a Jew, he replied, “Oh, give the kid a break.” But that, of course, is merely part of the larger story of the forgetfulness of American Jews.

What happens when the hidden is revealed? Reading Megillat Esther alongside one of Shakespeare’s “problem plays” shows that question to be at the heart of Purim’s paradox. 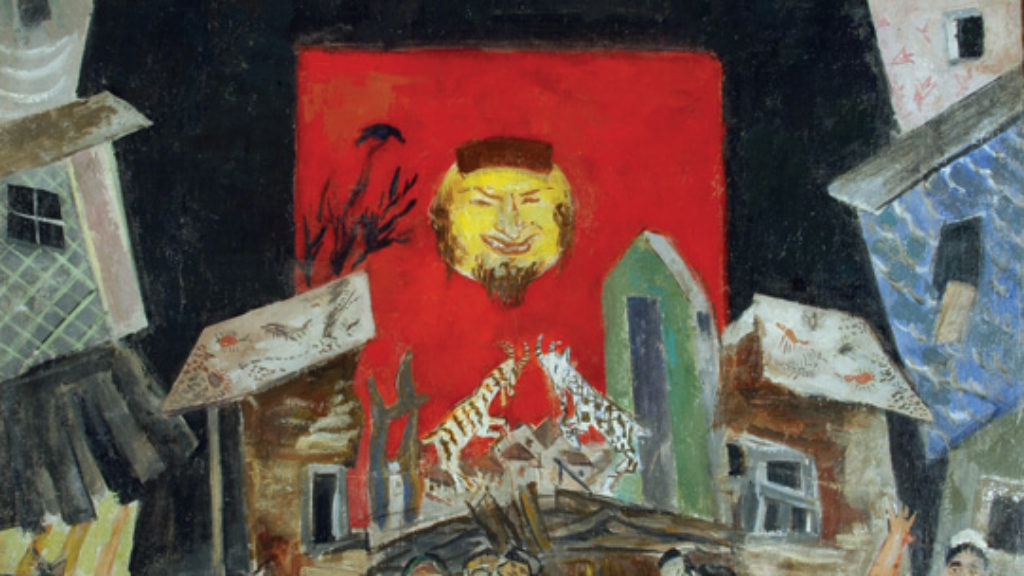 There are more than a hundred known examples of Little Purims commemorating miraculous deliverances of Jewish communities in Europe, North Africa, and the Middle East.