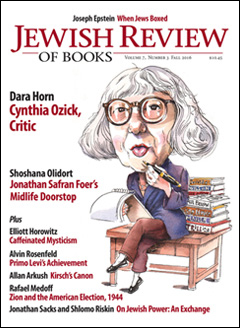 There He Goes Again

Foer departs from Roth’s model in many ways; perhaps most unsettling is the fact that he confuses crassness for humor.

The Mendelsohns' converted flour mill on the outskirts of Rehavia became a cultural salon, with concerts and poetry readings.

The Angel and the Covenant

Hurwitz’s ideal Jew is the rabbinic scholar who is also knowledgeable about, and open to, modern science.

In the summer of 1944 support for Zionism was transformed from a low-risk political gesture to a bona fide election issue. FDR was not pleased.

Unlike the Jews of Venice, whose charter was anxiously renegotiated every decade or so, American Jews participated in civic life, confidently building themselves a future.

When Rabbi Sacks writes, “It is not our task” (and it was not Abraham’s task) “to conquer or convert the world or to enforce uniformity of belief. It is our task to be a blessing to the world. The use of religion for political ends is not righteousness but idolatry,” it seems to me that he oversimplifies matters.