Daniel Bell belonged to a generation of New York intellectuals that lit up the American cultural firmament for decades and that has now virtually passed from the scene. Like others such as Irving Howe and Alfred Kazin, Bell emerged from a poor, immigrant Jewish neighborhood infused by learning and leftism. “The shul and the Socialist party—that framed my life,” Bell once remarked. His essays and especially his 1960 book The End of Ideology made Bell a permanent reference point for political thinkers on the right and left. The book’s subtitle, “On the Exhaustion of Political Ideas in the Fifties” suggested its theme—the demise of socialist verities. The End of Ideology captured the Zeitgeist at the end of the 1950s—or perhaps, more precisely, it captured the exhaustion of Bell’s own leftist generation in the wake of Stalinism and postwar American prosperity. 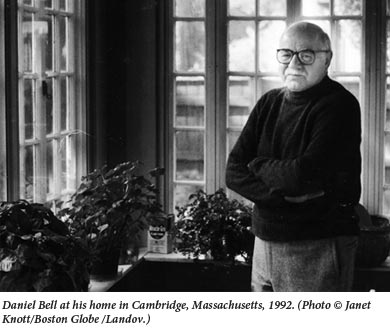 Unlike certain luminaries from his cohort such as his friend Irving Kristol, who in the 1970s embraced conservatism, Bell did not dramatically change his political colors during the course of his life. He began as a moderate anti-communist socialist and ended as a liberal committed to social equality. As a young man, he worked as a journalist for the socialist weekly, The New Leader, and planned a book on the Monopoly State. Dissatisfied with Marxist theory, Bell gave up the manuscript and in 1949 joined Fortune magazine as a labor reporter. He presented his ideas about the failures of Marxism in his first and, in many ways, best and most careful book, Marxian Socialism in the United States, which remains one of his least noticed. “The old simplistic theories no longer hold,” Bell stated in 1952, anticipating his argument in The End of Ideology. American society, which lacks a real bourgeoisie, petty-bourgeoisie, and proletariat, has evolved “in a far different direction” from that predicted by Marxism. Socialism in the United States, Bell concluded, has no future; it had become “a notation in the archives of history.”

At the same time Bell was writing off socialism, he was organizing a response to McCarthyism and the right wing of American politics. In The New American Right, published in 1955, Bell, with Richard Hofstadter and others, sought to understand how a right-wing movement emerged “not of depression, but of prosperity.” This proved to be an enduring conundrum, and Bell re-edited the collection in 1962 to account for the appearance of a new American right wing centered on the John Birch Society and Barry Goldwater. (He probably could republish the volume today with few changes.) The right-wing, he wrote fifty years ago, seems driven by rancor and a resentment of a cosmopolitan modernity; it wants to return to mythic values of individual initiative and self-reliance. In political terms, this means “the dismantling of the welfare state” and the “taming of labor unions.”

The 1960s proved a difficult time for Bell and many of his generation. The Black Power movement, student protests, feminism, and the counter-culture upset their theories—and lives. Announcements of the “end of ideology” proved premature. Indeed, what is now called neoconservatism derives from the response of Kristol and others to the 1960s. Bell himself had already broken with his friend C. Wright Mills, the radical sociologist who embraced the New Left. In 1968, when student strikes and an occupation took place at Columbia University, Bell was a tenured sociologist there. And he was not pleased. Bell’s account of the Columbia events sought an explanation in psychology—a mass delusion had infected students—and dripped with contempt. In 1969, he fled Columbia for Harvard and for what he hoped would be the quieter streets of Cambridge.

Yet Bell never followed Kristol all the way into neoconservativism. He went on to write insightful books such as the Coming of the Post-Industrial Society; and in his lucidity, his learning, his combativeness, but also in his openness, Bell exemplified the best of the New York Intellectuals. He welcomed visitors, and was known for his non-stop and heady talk. He occasionally pondered his Jewish identity as a secular intellectual. “I have no final answers,” he admitted. “I was born in galut,” and live “the outward life” of an American with “the inward secret” of the Jew. “I walk with this sign as a frontlet between my eyes, and it is as visible to some secret others as their sign is to me.”

Bell moved from journalism to the professoriate, but he skipped a doctorate. This might explain, in part, why he did not specialize; or, as he rather famously remarked, “I specialize in generalizations.” Nor did he write narrow and jargon-laced monographs, but rather limpid essays, which constituted his books from The End of Ideology to The Cultural Contradictions of Capitalism. In this too Bell typified his generation. The sweeping essay was a trademark of the New York Intellectuals.

Irving Howe commented on this mania of “the Jewish boys” to tackle all matters great and small as they left their neighborhood for the wider world. “We thought we should know everything.” For this reason they did not want to be pigeonholed as literary critics or sociologists. “We used to make fun of the guy who spent ninety-six pages analyzing a twelve-line poem,” Howe remembered. Rather, they wrote spirited essays that addressed society as a whole. “Behind this is the very profoundly Jewish impulse: Namely, you’ve got to beat the goyim at their own game. So you have to dazzle them a little.” Howe added, “Danny Bell lives by the same notion.” So he did, and we are the richer for it.

Yirimiyahu be-Tzion is a solid work of intellectual history, devoted above all to understanding Judah Magnes as he understood himself, sympathetic but honest, and attentive to the weaknesses as well as the strengths of his thinking.