To the women and men of Kesher Israel

The most common understanding of disagreement, in the private sphere and the public one, is that it represents a failure. A single understanding, a shared understanding, is preferred to a multiplicity of understandings, which is rejected as an epistemologically fallen condition. We begin with many, but we aspire to one: The grip of the holistic fantasy is profound. Disagreement is a kind of fragmentation, but we wish to be made whole. The many factors that are responsible for intellectual disharmony—rhetorical, conceptual, psychological, cultural, political—are regarded pejoratively as impediments that need to be refuted or discarded, as obstacles in the way of a higher arrangement. That higher arrangement is consensus. Who does not prefer consensus to conflict? Is quarrelsomeness not a vice? Surely a quarrel is a kind of conflict, a state of affairs in need of correction. A quarrel demands resolution and reconciliation. To see things differently is to surrender to difference, whereas sameness or similarity of perspective brings us closer and even unites us. The dream of intellectual concord is also a dream of social concord. The abolition of disagreement, when it is not coerced, is a promise of union and peace.

Recently I came upon a fine example of this consensualist mentality. In 1943, not long before she starved herself to death in England in solidarity with the people of occupied France, Simone Weil wrote a short essay called “On the Abolition of All Political Parties.” It was published posthumously in 1950, and it has recently appeared in an English translation by my late friend Simon Leys. Weil begins her essay with an endorsement of Rousseau and proceeds to develop her own alarmingly Rousseauist vision of perfect society-wide agreement. “Rousseau took as his starting point two premises,” she writes. “First, reason perceives and chooses what is just and innocently useful, whereas every crime is motivated by passion. Second, reason is identical in all men, whereas their passions most often differ. From this it follows that if, on a common issue, everyone thinks alone and then expresses his opinion, and if afterwards all these opinions are collected and compared, most probably they will coincide inasmuch as they are just and reasonable, whereas they will differ inasmuch as they are unjust or mistaken. It is only this type of reasoning that allows one to conclude that a universal consensus may point at the truth. Truth is one.” Weil describes these assumptions as the basis of “our republican ideal.” There exists, of course, another republican ideal, which recognizes the inevitability, and even the nobility, of “faction” and chooses compromise and respect over conformity and massified certitude. Reading Weil, one yearns for Madison. Weil’s remarks also nicely illustrate the way in which a horror of disagreement may culminate in a philosophical monism. It is hard to stay away from metaphysics when one’s subject is truth. 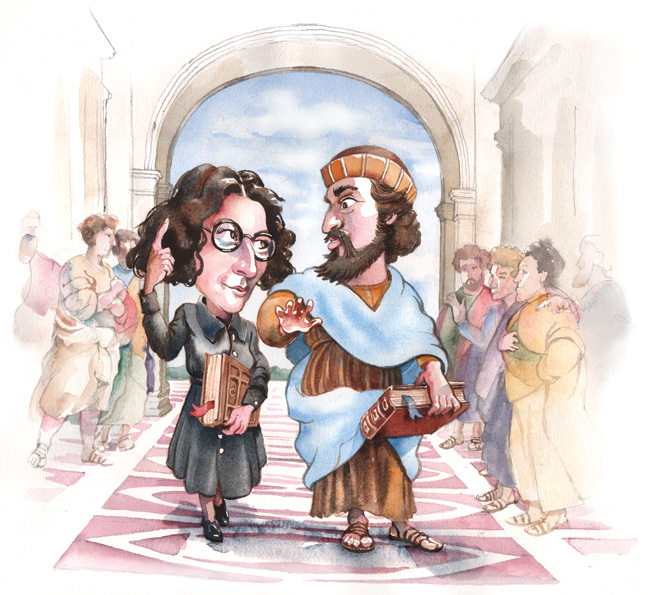 The full text of the talmudic passage is this: “Rabbi Aba said in the name of Samuel: For three years the house of Shammai and the house of Hillel disagreed. The former declared: the law should be made according to us, and the latter declared, the law should be made according to us. Then a heavenly voice proclaimed: These opinions and those opinions are the words of the living God, and the law is according to the house of Hillel.” The passage seems to shut down the very debates that it has just sacralized—except that the establishment of the law does not dissolve the legal discussion. The argument survives the decision, which is made among the elders according to majority rule, so that the community may function. But the argument was never itself purely functional. It was, instead, intrinsically valuable. (A practical spirit motivated also the medieval and early modern enterprise of legal codification, but insofar as the codes represented a suspension of the work of analysis, a claim to intellectual closure, they were ferociously opposed.)

This same epic quarrel between the house of Hillel and the house of Shammai is described in a mishnah as “a quarrel for the sake of heaven [which therefore] will endure.” The endurance of a quarrel: What sort of aspiration is this? It is the aspiration of a mentality that is genuinely rigorous and genuinely pluralistic. The tradition of commentary on that mishnah is a kind of history of Jewish views on intellectual inquiry—from the Levant in the 15th century, for example, there is Ovadiah Bertinoro’s remark that “only by means of debate will truth be established,” an uncanny anticipation of Milton and Mill, and from Hungary in the 19th century there is the gloss by Rabbi Moses Schick, who himself had a role in a community-wide schism, that “sometimes it is our duty to make a quarrel . . . For the sake of truth we are not only permitted to make a quarrel, we are obligated to make a quarrel.”

And argument is emphatically man-made. In the talmudic passage cited here, we witness a moment of high religious drama: the abdication of the divine from the human quest for truth. The heavenly voice announces the permanent validity of both sides of an argument and leaves the labor of clarification in our hands. The sacralization of disagreement in Judaism is accompanied by the renunciation of any heavenly role in the attempt to verify legal and philosophical propositions. There is even a midrash that imagines God himself sowing the Torah with perplexities, by imbuing each of his edicts with “49 reasons to rule ‘pure’ and 49 reasons to rule ‘impure.” We are not given the answers. We must find them. At least intellectually, this God has absconded.

“It is not in the heavens”: The scriptural phrase became a recurring refrain. Disputation is an entirely immanent activity. This is an extraordinary expression of confidence in reason and in the mortals who engage in reason. In this practice of earthly self-
reliance, thought is preferred to epiphany, and revelation is a thing of the past. (There are a few works of medieval Jewish jurisprudence that claim to derive their rulings in one way or another “from the heavens,” but a close inspection of their conclusions shows that their claim to a transcendent origin of human opinion is a theological and literary conceit.) Since the end of prophecy and divination, ideas and practices must be validated by principles and by reasoning from principles. Certain problems, to be sure, will not find their solutions, as the ancient rabbis said, until the arrival of Elijah, that is, until the advent of the messiah; but that is really a mythological way of saying that those problems are, to borrow the old phrase of a British philosopher, essentially contested. We are to learn to live with disagreement and not to think less of it because it cannot be miraculously consummated.

Learning to live with disagreement, moreover, is a way of learning to live with each other. Etymologically, the term machloket refers to separation and division, but the culture of machloket is not in itself separatist and divisive. This is in part because all the parties to any particular disagreement share certain metaphysical and historical assumptions about the foundations of their identity. But beyond those general axioms, the really remarkable feature of the Jewish tradition of machloket is that it is itself a basis for community. The community of contention, the contentious community, is not as paradoxical as it may seem. The parties to a disagreement are members of the disagreement; they belong to the group that wrestles together with the same perplexity, and they wrestle together for the sake of the larger community to which they all belong, the community that needs to know how Jews should behave and live. A quarrel is evidence of coexistence. The rabbinical tradition is full of rival authorities and rival schools—it owes a lot of its excitement to those grand and even bitter altercations—but the rivalries play themselves out within the unified framework of the shared search. There is dissent without dissension, and yet things change. Intellectual discord, if it is practiced with methodological integrity, is compatible with social peace.

The absence of the God’s-eye view of an issue, and the consequent recognition of the limitations of all individual perspectives, has a humbling effect. A universe of controversy is a universe of tolerance. Machloket is not schism, and the difference is crucial. Though disagreement may lead to sectarianism, most disagreement in the history of this ever-thinking people has been contained, and has been brilliantly developed, on this side of sectarianism. I do not mean to exaggerate the loveliness of the system: There has been heresy and there has been heterodoxy, and Jews have persecuted other Jews for their opinions. Intellectual integrity is always a risk to community, because some minds may think themselves, rightly or wrongly, beyond the limits. But the tradition of Jewish debate, especially legal debate, is striking for how rich it remains within the limits. Whether or not heresy and heterodoxy are forms of heroism, it is important to acknowledge that fidelity, and the internal growth of a tradition inside its carefully examined boundaries, may also be heroic.

Thus described, the Jewish model of quarrelsome unity may be hard to grasp. Can a religious way of life really endure such a high degree of inconclusiveness? Or put differently, can pluralism comport with absolutes? The conventional answer, in our time, is that it cannot, and so it must be something else. It must be perspectivism, or pragmatism, or relativism. The contemporary discussion of these questions by Jewish commentators has been rather slavishly dominated by the anti-rationalist clichés of contemporary philosophy. My own view is that any attempt to relieve the argumentative tradition of its rationality; or to seek a release from its dissonance, by denying either its commitment to truth or its commitment to many-mindedness; or to reduce rational argument to the emotional expression of an individual or a group—all this represents both a misunderstanding of the achievement of the Jewish style of controversy and an impoverishment of it. Reason is often depicted as repressive and orthodox, but it is in fact open-ended and infinitely patient, which is why thinkers in our times are still arguing with thinkers in ancient times and building upon their work. The enterprise of argumentation is ancient but not antiquated.

Truth may be one, as Weil said—but even so, what is it? We live in the arduous interim between the belief in truth and the discovery of truth. It is never too late for a rational objection or a logical advance. The contemporary anxiety about reason is misplaced: Emotion is private and opaque, but reason is public and lucid. This is proven on every serious Jewish bookshelf. Judaism evolved and progressed and flourished as an alliance of the heart and the head. The heart alone would not have sufficed, certainly not for a tradition whose essential act is the act of interpretation. 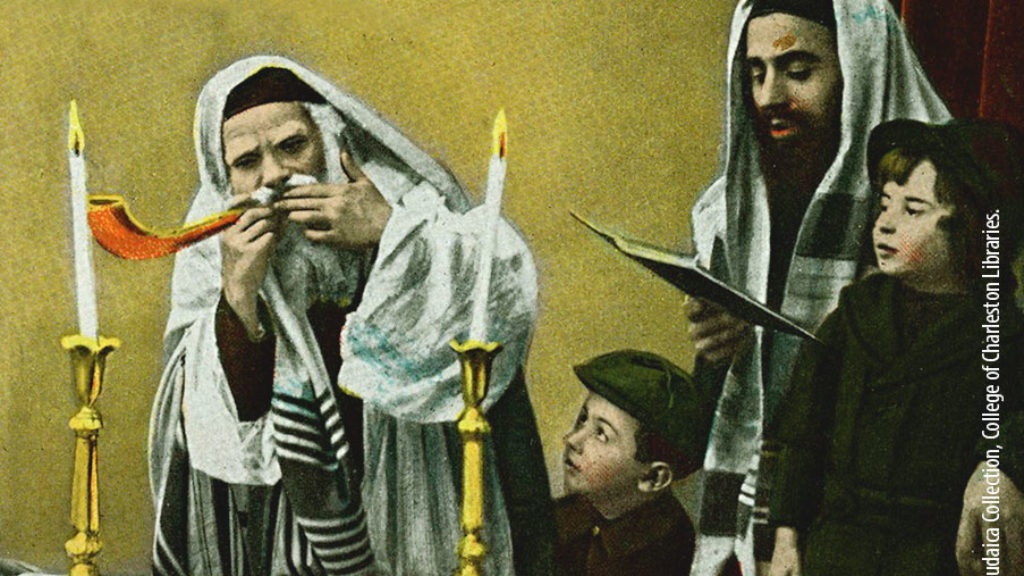 Happy Is the People Who Knows the Blast

Rabbi Moshe Hayim Efrayim of Sudilkov learned Torah with his grandfather the Ba’al Shem Tov, who later visited him in dreams. In the Degel Machaneh Efrayim, he gave the shofar blast a radical Hasidic meaning.

In Chapterhouse: Dune, the sixth book in the Dune series and the last Herbert wrote before his death, the Jews show up.