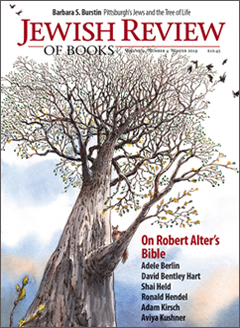 Was Newton a Magician?, Don't Forget Pumbedita!, Was Herzog Crazy?

Pittsburgh Jews, Squirrel Hill, and the Tree of Life

In the wake of the recent massacre, a local historian tells the story of the Pittsburgh Jewish community and the 154-year-old Tree of Life synagogue.

Among the many papers discovered in the Cairo Geniza are documents, including letters between Yeshua ben Ismail of Alexandria and Khalluf ben Musa in Qayrawan, in present-day Tunisia. The papers showing disintegration of their partnership shine a light on how a particular kind of business agreement affected the composition of a halakhic guidebook still widely consulted to this day.

Tim Grady makes a careful but controversial case about the way Jews contributed to or supported Germany's worst excesses in World War I.

In their new book, Jehuda Reinharz and Yaacov Shavit focus on the efforts of the leaders of a diverse and disunited Jewish people in Europe, the United States, and Palestine to cope with this crisis in the years leading up to World War II.

A 1977 Jerusalem Post article on Harold Pinter's visit to Israel was enticing but short on details. Pinter had just been to the Dead Sea (“hot!”) and Mount Masada (“high!”) and was planning to visit a cousin who lived on a kibbutz.

Doron Rabinovici and the Crisis of European Jewish Identity

To live in Vienna as a Jew is also to be reminded that those who perpetrated the Shoah were defeated yet, unlike the victims, were able to resume their lives afterwards.

Chaim Weizmann regarded his 1919 agreement with Emir Faisal as an epoch-making treaty. That didn’t turn out to be the case, but a century later an Arab-Zionist alliance may be reemerging.