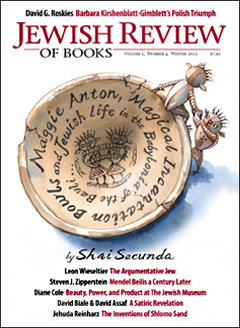 With Friends Like These, Protective Edge, Cobwebs Cleared, & More

Virtually nothing of Babylonian Jewry of the talmudic period, from the 3rd to the 6th century C.E., has survived beyond the Babylonian Talmud itself to help contextualize or confirm the many things the text tells its readers.

Silence of the Lambs

Sacrifice is both foreign and familiar. Actually sacrificing an animal is difficult to imagine, and yet we continue to speak freely of sacrifice in connection with political and moral obligations.

Earlier this year, an email announcement of a publication made its rounds among scholars of Jewish studies. Written in the flowery Hebrew of the Eastern European Jewish Enlightenment, the advertisement proclaimed that the work would “reveal all secrets.”

The fame of Mendel Beilis—falsely accused of murdering a Christian boy in Russia 100 years ago—was lavish, if bitter and short-lived.

Was Nazi hatred of the Jews driven by envy of their economic and social success or rather by a fear of a perceived threat to German culture and identity?

From overly familiar ingredients, Joanna Hershon has concocted something that is both satisfying and unexpected.

Shlomo Sand believes that nations are, in the nature of the case, modern inventions, and that Israel is a particularly bad one.

The great Yiddish poet Jacob Glatstein wrote two autobiographical novels and envisioned a third, set in America. Why didn’t he write it?

Kaplan writes that “one key statement . . . I would have liked to see Stern contend” with is “‘For only truth pleases God and only falsehood angers Him,’ [Guide 2:47] which implies that only truth, not the search for truth, is of value.”

To sharpen Stern’s point, we may say that the person who believes God literally gets angry metaphorically angers God.