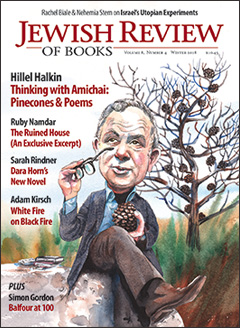 Rome and Jerusalem (and Cardinal Newman), Singer and Rabbi Dessler (and an fMRI Study), Levinas and Lear, and More

The controversies over how (and whether) Great Britain should celebrate the recent centenary of the Balfour Declaration were revealing. Anglo-Israel relations have rarely been uncomplicated, but they could soon be much worse.

The Many Dybbuks of Romain Gary

Romain Gary—a Lithuanian Jew who regarded himself a Frenchman par excellence—emerges in a recent memoir as a master of self-invention and (just as immoderate) verbal invention, a chameleon of pseudonyms, a man of irreconcilable contradictions, divided against himself.

The notion of zera kodesh, “holy seed,” appears only twice in the Bible, both times in reference to the people of Israel as a whole. For Hasidim, however, it has a more restricted meaning.

History of a Passé Future

At their inception, the children’s house and collective education were to shape a new kind of emotionally healthy person unfettered by the crippling bonds of the traditional or bourgeois Jewish family. Over the last two decades or so, a cultural backlash has set in among some of those raised in children’s houses.

Life on a Hilltop

City on a Hilltop is superbly researched, altogether accessible, and will dispel many lazy stereotypes about the people whose story it tells. But it leaves out a lot.

A Tale of Two Stories

In their respective new books, Schama and Feiner attempt not to relate the whole history of the Jews during the period covered by their volumes but to tell their story—indeed, to a large extent, to let them tell their story in their own words, culled from their letters, diaries, and autobiographical works.

Always in flight, one of the world’s permanent transients, Joseph Roth (1894–1939) was a one-man diaspora. A drunk and a fantasist, he was also a marvelous writer whose work was bedizened with metaphor, laced with simile.

The Ruined House (An Excerpt)

In 2014 Ruby Namdar won the prestigious Sapir Prize for his novel Ha-bayit asher necherav, the first time in the award’s history that it went to a writer not living in Israel. On November 7, 2017, Harper released it under the title The Ruined House: A Novel, in an English translation by Hillel Halkin. The Jewish Review of Books is pleased to present this excerpt from the novel’s opening.

The Modern Crisis of Moral Thought: An Exchange

Abraham Socher's pre-Yom Kippur assessment of the possibility of true repentance led to a discussion on the mussarist's answer (or non-answer) on moral choices.

It may be useful as a tool for moral self-improvement to see oneself as adjudicating between opposing forces within one’s breast or brain, though where precisely the adjudicator, or charioteer, resides is more than a moot point.

When I was 12, my parents bought me a gigantic Yiddish-Russian dictionary. Maybe this was their way of compensating for the fact that they had not told me I was Jewish until second grade, when I came home singing a Ukrainian ditty with the word “zhid.”