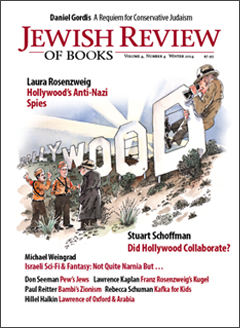 Cyprus Bound, A Salter Exchange Between Readers, Time to Proselytize?

In 1934, Hollywood's Jewish moguls met secretly at the Hillcrest Country Club to hear an unusual pitch. A former ADL official was running a network of World War I veterans who had infiltrated the local Nazi organization. The intelligence was alarming, and he needed funding.

In 1971, 41 percent of American Jews were part of the Conservative movement. Today it's 18 percent and falling fast. What happened? Maybe its leaders never knew what Conservative Judaism was really about.

Kafka continues to interest everyone from academics to Hasidic slam poets.

In 1923, Franz Rosenzweig wrote an open letter to Martin Buber on being bound by Jewish law in the modern age. Interestingly, he was just as concerned with minhag (custom) as halakha.

What was life like in pre-revolutionary Russia? It certainly did not take place in an unchanging shtetl.