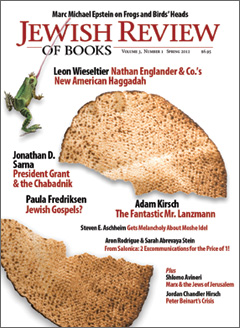 The Bimah Takes Center Stage and Chutzpah or Khezbh'n hane'fesh?

President Grant and the Chabadnik

In 1869, President Grant received an unexpected visitor at the White House: Haim Zvi Sneersohn, a flamboyant and eccentric Chabad emmisary from Jerusalem. Bedecked in what The New York Times described as an "Oriental costume" consisting of a "rich robe of silk, a white damask surplice, a fez, and a splendid Persian shawl fastened about his waist," he strode self-confidently toward the president. Grant instinctively rose to greet him.

What a Friend We Have in Jesus

A new crop of books about Jesus, by Jews and for Jews.

Moshe Idel is heavy on melancholy, not to mention surprising claims about the scholars of Western Europe.

The Lost Textual Treasures of a Hasidic Community

The Regensburg Library at the University of Chicago contains a catalogue of markings and stamps from books saved from Nazi destruction. One such stamp comes from the library of the Karlin-Stolin Hasidim, a collection that might contain the most valuable manuscript for understanding the roots of Hasidism. But where is it?

Karl Marx, the Jews of Jerusalem, and UNESCO

Some revolutionary quotations from Marx and the People's Republic of China.