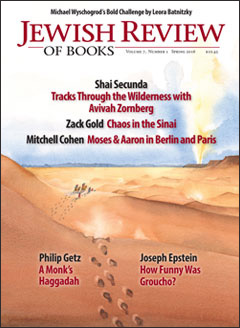 Reform from Within, God-Intoxicated Plenitude, A Bukh Missing in Boisk

Two new books push readers to examine the phenomenon of childlessness in the Jewish tradition and modern Jewish life.

In locating Disraeli within modern Jewish history, the late David Cesarani engages with a tradition that he traces back to Hannah Arendt and Isaiah Berlin, who placed Disraeli’s Jewishness at the heart of his private life, his novels, his political thought, and his career as a politician.

There are at least two problems with the widely repeated narrative about Rosenzweig's sudden commitment to Judaism: It’s historically false and philosophically pernicious.

As Though the Power of Speech Were an Ordinary Matter

Moods provides glimpses into Yoel Hoffmann’s life in literature and his ambivalence about the project of capturing life in words.

Chaos in the Wilderness

Unlike reporters who are happy to rework official government statements, Mohannad Sabry reports on the Sinai by drawing on a broad network of sources in the region.

Halakha and State: An Exchange

In our Winter 2016 issue, Elli Fischer explained why he defies the Israeli Chief Rabbinate and argued for radical reform. Four responses and his rejoinder.