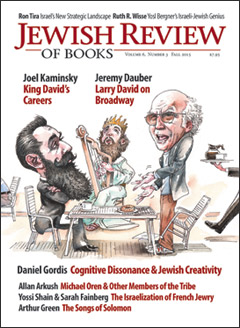 There was a sense of oddness about Bruno Shulz that German-Jewish writer Maxim Biller exploits in his new novella, Inside the Head of Bruno Schulz.

Scholars and lay readers remain fascinated by the biblical stories of David and the history behind them, as a new batch of books shows.

Harvey Shapiro, who grew up in an observant Jewish family, was a connoisseur of distances and silences.

In his latest book John J. Clayton delves once again into the literary territory he has been patiently mapping for some time.

In 1902 Abraham Harkavy published two previously unknown psalms and parts of two others from a manuscript in the Cairo Geniza. They may date back to the Second Temple.

Yosl Bergner once said that “whatever colors I pour onto the canvas, they come out gray.” His grayscale paintings are stunning, but he paints in gorgeous color too. A personal memoir of a 94-year-old genius.

On Old Stones, a Black Cat, and a New Zion

There is a legend that Prague’s Altneuschul was built on a foundation of stones from the ancient Temple in Jerusalem.