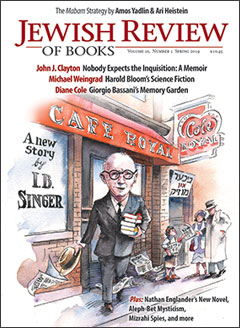 Lachrymose Criticism?, Was Lincoln Jewish?, The Rebbe and the Professor, and The Transjordan Question

Sefer Yeṣirah is the most influential Jewish book you never heard of. Indeed, it has been argued that early commentaries written on the book tilled the gnostic soil out of which sprouted the tree of Kabbalah.

Victim Enough? The Jews of North Africa During the Holocaust

As the Tunisian Jewish novelist Albert Memmi wrote, “I am not enough of a victim; that is why my conscience is tortured.” Must the Jews of North Africa, as contributor Lia Brozgal puts it, write “a history that competes with a more catastrophic one, or be written out of history?”

If you visit Ferrara, Italy, you can let Giorgio Bassani be your melancholy guide as you stroll along “the crowded rows of stores, shops and little outlets facing each other” to arrive at the synagogue’s “baked-red facade.”

Seventy Years in the Desert

"As horrific as the Holocaust was, it is firmly in the past. . . . Though I remain horrified by what happened, it is history. Contemporary antisemitism is not. It is about the present. It is what many people are doing, saying, and facing now," writes Deborah Lipstadt in her latest book.

Our Man in Beirut

The Arab Section, suggests Matti Friedman, in one of his latest book's nicer lines, “needed men idealistic enough to risk their lives for free, but deceitful enough to make good spies.”

I mug at myself in the mirror and recite the old Monty Python gag.

For a young daydreamer, nothing is more beautiful than the unspoken, which becomes the focus of desire. And the Jewish unspoken of my childhood was so vast that, within it, the imagination could reach near-spiritual proportions.