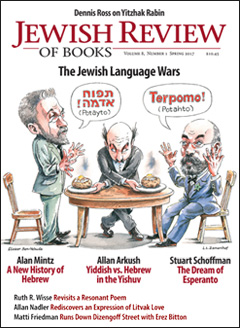 Uninspired Cousins and Jewish Excellence, The Menorah and Its Flame, A Joke Retold, Romcom, and Remembering Salonica

In real life, or as much of it as historians can reconstruct, Septimania was a name for the region of southern France that included the Jewish populations of such venerable cities as Carcassonne, Narbonne, and Toulouse. Jonathan Levi leans on the most delightfully far-fetched version of these events in his latest novel.

Tension between the quotidian on the one hand and an abiding reserve and unease on the other—is palpable throughout Saul Friedländer’s new memoir.

On the Importance of Booing Mayne Yiddishe Mame

How did Zionist elites create a new national identity for rank and file members whose ideals did not match their own?

A Life with Consequences

Yitzhak Rabin was a realist who saw peacemaking not as the source of security but as a further development that needed to be based upon security.

Of Spies and Centrifuges

Jay Solomon traces decades of spy games between the United States and Iran, a conflict, he writes, “played out covertly, in the shadows, and in ways most Americans never saw or comprehended.”

The American religious landscape that Uzi Rebhun sketches out in his new book, Jews and the American Religious Landscape, is marked by virtually boundless freedom and pluralism, as well as increasing fragmentation, due to the growth of “self-searching and religiosity by choice.”

Funny How a Poem Can Get Under Your Skin

Toward the end of his life, the talmudist Saul Lieberman published his only Yiddish essay, an appreciation for his friend, the novelist Chaim Grade, the great witness to a lost world. Translated and with an introduction by Allan Nadler.

Mystical Teachings Do Not Erase Sorrow

In Yehoshua November’s new collection, however, it turns out that the difficulties of being a Jewish poet do not primarily flow from being either Jewish or a poet but from the underlying difficulties of life itself.

The text is full of underlining, circled words or phrases, arrows, careful cross references, and copious comments in Yiddish, English, Spanish, and Hebrew. It’s what my students at Ohio State might call an “extreme reading.”